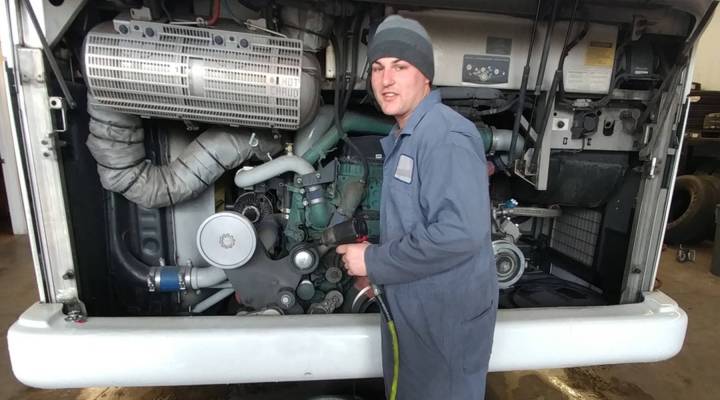 COPY
John Williams sought a job a that didn't need a degree and ended up working as a mechanic in the Bay Area. Photo courtesy of John Williams
My Economy

John Williams sought a job a that didn't need a degree and ended up working as a mechanic in the Bay Area. Photo courtesy of John Williams
Listen Now

For this latest installment of our series My Economy, we hear from John Williams, a 25-year-old bus mechanic in the San Francisco Bay Area.

“My name is John Williams. To me, the economy seems sluggish but decent. I think personally, we have an economy that basically burdens people with debt to supplement larger businesses — basically banks.

My older brother has a bachelor’s degree in European history. He currently is teaching in a foreign country because he can’t find a job in America. My sister has a bachelor’s degree in economics. She works in marketing at a bank. So everyone that I know that got a degree basically did the same thing — they went into a lot of debt, they started the jobs and everyone wanted 10 years of experience but wanted to pay entry-level wages.

So I kept trying to think of jobs that are necessary that don’t need degrees. I noticed that the world is changing quite rapidly, and so I thought of a job that nobody really wants to do. I noticed somebody was broken down on the side of the road, and I thought, “Maybe I can be a mechanic.”

So I went to work on buses in this small town outside of San Luis Obispo. I moved somewhere no one wanted to live and did a job that no one wanted to do. From there I used my skill sets, and I kept moving on, and I moved back to the Bay Area. Basically, tech companies got so frustrated with the public transit because their employees kept being late that they actually have their own bus systems. And so I actually jumped on that ride because the tech companies make so much money and the tech workers make so much money for the bus systems.

I personally would love to go to school. One of the things I have really been interested in is robotics. I do believe that my industry will eventually go away, because I do see a future where there aren’t as many large diesel vehicles on the road or they are going to be either self-driving or self-maintaining. I would like to get a bachelor’s eventually in engineering. That’s what I really wanted to do, but I didn’t want to go into debt.”