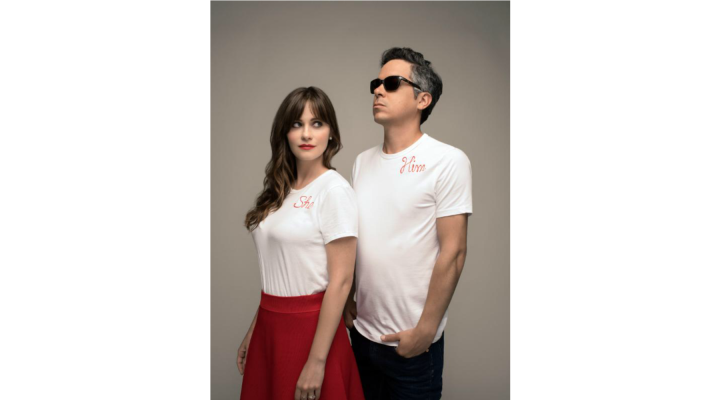 COPY
Zooey Deschanel with She & Him partner M. Ward. Courtesy of Grandstand HQ
The Marketplace Quiz

No matter who you are, you’ve probably had a rough day at the office that changed your perspective, or maybe you made an impulse purchase you really, really wish you could take back. This week, actor and musician Zooey Deschanel takes our money and work-inspired personality questionnaire based on those experiences.

Zooey Deschanel’s latest album with band She & Him, “Christmas Party,” is out now.

Well, it’s hard to say, because they’re like things that I feel like I could do now maybe, but maybe making children’s clothing.

Are we talking toddler level? Baby?

Baby through toddler. I have a toddler, and the clothes are so cute. And I made her some little outfits before she was born that are really sweet.

One of those vacuums that’s like, a robot vacuum [laughs].

Oh yeah no, people love it. It’s a great product. I just got really into the idea of it, and then I haven’t used it. And then one night, my nephew came over and was playing with it or something. And then, one night I hear this like, terrifying screeching noise. And I walk out and there’s like, a light coming from the living room. I’m like, “What is going on? Is there an alien invasion?” [laughs] I walked downstairs and it was the Roomba. I guess my nephew pressed some buttons or something.

When did you realize being a musician and actor could be an actual paying career?

In high school. I grew up in LA, so I started auditioning for movies and television in high school, and then I also sang, you know I did some like club shows and stuff and made like, $40 singing. So I was like, “Alright! That was fun and I made some cash.”

A microphone that Brian Wilson gave to me. I sang on his record and then he gave me the mic that I recorded with.

Waking up at 5 in the morning most days.

I feel a little bit hesitant to suggest that everyone should own something no matter the cost. I would say a coffee maker but not everyone loves coffee.

Everyone should love coffee though.

Yeah [laughs], so everyone should have a coffee maker. And or, make it for friends.

I may have had this piece of advice, but I’m not sure that it was like very loud and clear. I wish someone had really drilled it in that you should always be true to your own self and tastes, and not get too carried away with pleasing other people. I try my best to do that. You can’t always. There’s a give and take, and anytime you’re being paid to do something or you’re collaborating with a lot of people, they’re gonna be some compromises that you make, but you should at least, you know, try. And I think at the beginning when I first started, it was a little bit more confusing, and then once I really discovered that, then you know you can always kinda stand by things you do.