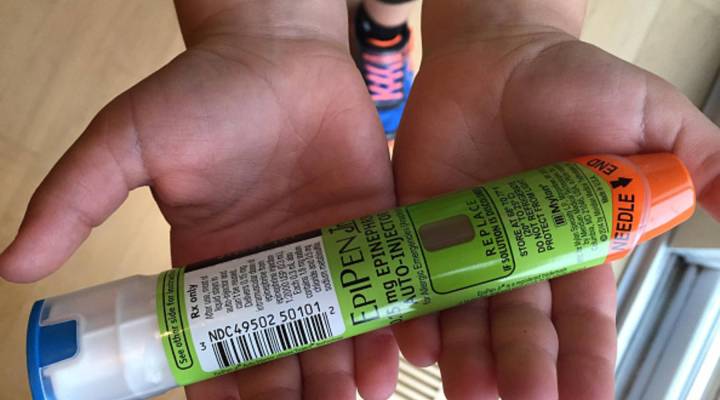 COPY
A youngster in Hudson, Wisconsin holds his Epipens which help counteract his allergic reactions. A five-fold price hike for EpiPen, which allergy sufferers use to counteract life-threatening reactions, has made Mylan the newest drugmaker to come under attack in the United States for profiteering. LUCAS TRIEB/AFP/Getty Images

A youngster in Hudson, Wisconsin holds his Epipens which help counteract his allergic reactions. A five-fold price hike for EpiPen, which allergy sufferers use to counteract life-threatening reactions, has made Mylan the newest drugmaker to come under attack in the United States for profiteering. LUCAS TRIEB/AFP/Getty Images
Listen Now

The drug maker Mylan has responded to the anger over its pricing of EpiPens by promising a generic version that will sell for half the EpiPen’s full price.

Sounds like a pretty big concession, right? An embarrassed company looking to do right.

But it turns out this may be a savvy business decision that helps the pharmaceutical company maximize its EpiPen profits.

The math certainly seems pretty simple, but in the pricing world of pharmaceuticals, little is as simple as it seems.

In the next few weeks Mylan has said it will introduce a two-pack of EpiPens for $300, 50 percent cheaper than the identical branded product.

But even if everybody starts buying the cheaper version, Mylan may still come out ahead. University of Chicago economist Rena Conti said that’s because the company offers lots of discounts and rebates on the branded drug.

“Mylan is claiming they will cut out all the discounts and rebates,” she said. “That means that Mylan’s net price might not change that much and even go up.”

The company hopes this news helps it slide out of the spotlight after making headlines for jacking up the price of EpiPens by more than 500 percent. The life-saving product treats severe allergic reactions.

But Harvard physician Aaron Kesselheim said launching its own generic could scare off any would-be competitors, knowing that the second company stands to make less than Mylan.

“The strategy here is to try to delay full, broad competition as long as possible and to maintain some fraction of the generic market for themselves,” he said.

We’re in a rush and trying to get things done and so doctors are a little bit lazy when they do that stuff ,and so there we go,” she said. “We write the easy thing we know.”

In other words, doctors will keep prescribing Mylan products whether it’s the branded EpiPen or its generic version.