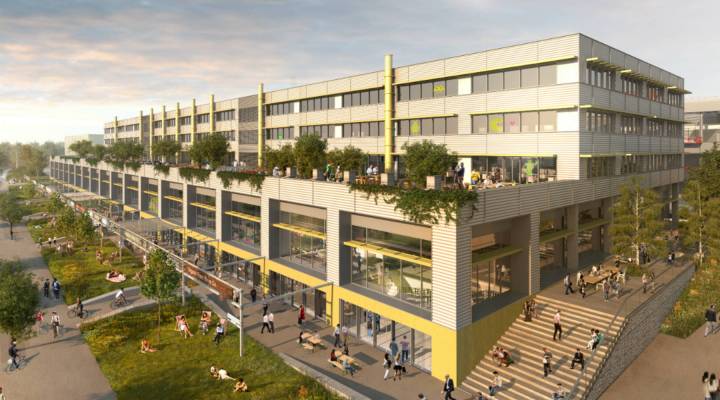 Since the London Olympic Games in 2012, the race has been on to win that most elusive of all Olympic prizes – a genuine legacy.

Bureaucrats and business people have worked hard to turn to practical use some of the lavish structures built on the Olympic Park in east London; the stadium has become a soccer ground and the velodrome and the aquatics centers have continued as sporting venues that are now open to the public.

The least attractive of those structures, which served as the press and broadcasting centers during the games, may turn out to be the most commercially successful of the Olympic buildings. The complex — now called “Here East” — is transforming itself into what could be one of Europe’s largest technology hubs. The latest phase – just unveiled – is the Innovation Centre.

“We have 68,000 square feet of space into which we intend to attract technology companies large and small, entrepreneurs, designers, engineers and investors” said Claire Cockerton, CEO of the new center. “We are creating an ecosystem in which creative businesses seeking to revolutionize sport, health, fashion and the so-called Internet of Things can flourish.”

Gavin Poole, CEO of Here East with a total of 1.2 million square feet under his control, said the goal is cross-fertilization.

“We’re offering lots of open spaces where people will be able to “bump and mingle,” to talk, discuss ideas and think about tomorrow,” he said.

Not everyone’s a fan. One critic called the whole Olympic Park “a frigid wasteland.” And tech writer Rupert Goodwins doesn’t think you should even try to create a technology cluster like Here East and the new Innovation Centre.

“If you’ve got a really good idea, you can do it anywhere. One of the biggest competitors to this huge, tech business park model is the fact that lots of successful companies just exist online,” Goodwins said.

Others question whether Here East will become a major European hub if Britain leaves the European Union. The Brexit vote has already hit some commercial property prices in other parts of London.

But Here East seems to be working.  A major online sports channel has moved into the complex, and two universities and a number of other organizations are renting space too. Gavin Poole claims that 55 percent of the facility has been pre-let.

The place is unique. Claire Cockerton said if her new tenants in the Innovation Centre tire of bumping into each other, mingling and thinking about tomorrow, they can always use some amazing facilities.

“Our entrepreneurs can take a break and go for a swim in the London Aquatic Centre, the world’s fastest pool. Or take a lap around the velodrome, which is a few paces away. Or go for a walk, have a walking meeting in this incredible park,” she said.