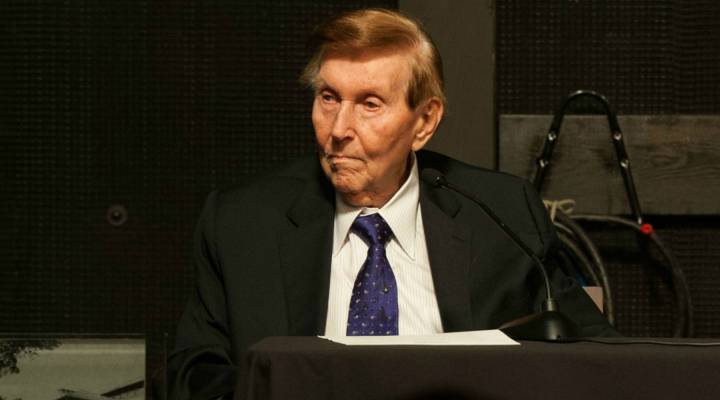 COPY
Sumner Redstone attends the dedication of the Sumner M. Redstone Production Building at USC back in 2013.  Valerie Macon/Getty Images

This story’s headline and text have been updated.

Viacom announced earnings this morning, which beat expectations at $1.09 per share despite the company soap opera that’s been unfolding.

There’s a media mogul, Sumner Redstone, who may or may not be mentally competent, a battle over board membership, and a granddaughter claiming she’s been cheated out of a $6 million inheritance, to name a few issues.

The mess Viacom is embroiled in couldn’t come at a worse time for a traditional media company grappling with a new era.

“All of these issues that are swirling with the family drama are happening at a time when the company is in a bit of a precarious position,” said Mark Robichaux, editorial director of Multichannel News.

Think about one of its flagship channels, MTV. Its ratings are falling. Young audiences now have tons of digital brands to choose from. He said there won’t be any clarity on MTV’s future or anything else until the soap opera has played itself out.

Allan Cohen, a leadership professor at Babson College, said you could have seen this coming — Sumner Redstone always was an old-school titan.

“It was predictable that he would end up with all sorts of complications around him, family aside,” he said, “Because he could never let go.”

There may be some clarity later this year. The board members Redstone is trying to oust will have their case heard in court in the fall.