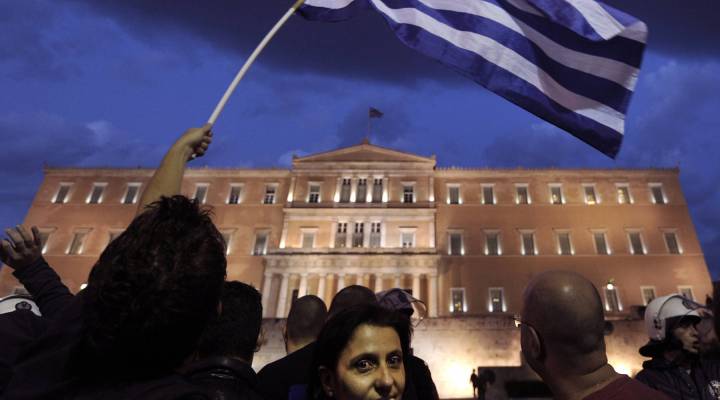 COPY
Protesters demonstrate in front of the Greek parliament in Athens during the crisis in 2011. MESSINIS/AFP/Getty Images
Greeks in crisis

Protesters demonstrate in front of the Greek parliament in Athens during the crisis in 2011. MESSINIS/AFP/Getty Images
Listen Now

Last year – at the height of the Greek crisis – Marketplace spoke with Spiros Kontogiannis in his flower shop  next to the parliament in Athens.  He was pessimistic then about the prospects for his family, his business and his country. One year later he is still rather gloomy. His flower business isn’t blooming.

“I’m on the edge. I don’t make money. I just survive. I know next year I will lose money.” he said. “To tell you the truth I don’t know what I will do then.”

His business has been crushed by ever-rising taxes   and shrinking consumer purchasing power.

“It’s like somebody is strangling us. It’s like we have no hope. You can’t live like that.  It’s just a matter of time before many small businesses  will close,” he said.

Such pessimism is widespread in Greece, but not universal.  Fanis Koutouvelis – who launched his software company in the teeth of the recession – is brimming with optimism  after seeing his  business prosper and grow.  He’s raised 2.5 million dollars in capital, employs 26 people, and is planning to launch in the US next year.

“I think this turmoil  in the Greek  economy has been  an opportunity for entrepreneurs,” Koutouvelis said.

His company – INTALE – has developed  software to help small  hard-pressed retailers cut their costs. Koutovelis says the crisis with its soaring youth unemployment has been – frankly – a boon .

“There is a lot of talent in Greece, a lot of young web developers, and they cost less than half what you would pay in New York ,” he said.

Greece clearly needs more young entrepreneurs like Koutouvelis. Many more. As the crisis grinds on youth unemployment still runs at more than 50 percent.