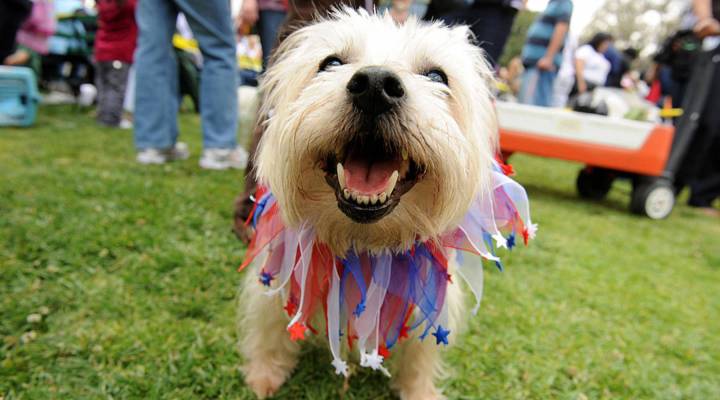 Fourth of July fireworks can make some dogs anxious, so pharmaceutical companies are making drugs to help.   ROBYN BECK/AFP/Getty Images

Fourth of July fireworks can make some dogs anxious, so pharmaceutical companies are making drugs to help.   ROBYN BECK/AFP/Getty Images

The world’s largest animal-pharmaceutical company hopes it has a blockbuster in its, ahem, paws.

Just in time for the July Fourth holiday, Zoetis’s new drug Sileo is the first drug approved by the Food and Drug Administration for dogs with noise anxiety, formally called canine noise aversion. Veterinarians began prescribing the medication in May.

“We don’t like to use the word, ‘blockbuster,’ but yes, I think there could be potential for this to take off,” said company veterinarian Sharon Campbell.

A recent survey commissioned by Zoetis suggests more than 40 percent of dog owners claim their dog suffers when there are loud noises, like Fourth of July fireworks, banging doors and even coffee grinders.

The American Veterinary Medical Foundation estimates there 70 million dogs in the United States. Sileo joins a crowded market that already includes over-the-counter therapies like pheromone treatments and natural supplements as well as prescription medicines like Prozac and Valium.

To administer the new medicine, the owner injects a syringe of gel between the dog’s cheek and gum. It can take effect within 30 minutes. A single syringe costs about $30.

University of Pennsylvania Veterinarian Carlo Siracusa said that’s a pretty high price when you consider “you can get a 90-day prescription at a pharmacy for $10,” though that’s for the human formulation of other anti-anxiety drugs commonly used to treat fear in dogs.

Owners should be clear that drugs should just make up “one component of treatment,” Siracusa said. In anticipation of the holiday weekend, he recommended that if a dog gets scared and seeks out a safe place, like under the bed, “that’s fine.” He also said a common mistake is that owners don’t take steps to soothe their pet.

“Comfort the dog and try to calm the animal down,” Siracusa said.