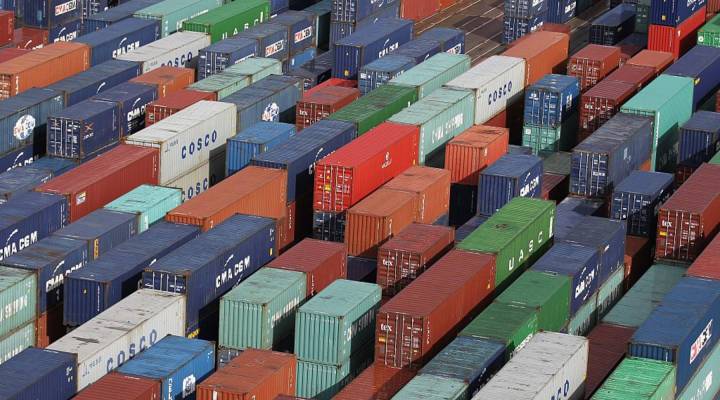 Freight containers on the deck of a French harbor.  CHARLY TRIBALLEAU/AFP/Getty Images
Brexit

Freight containers on the deck of a French harbor.  CHARLY TRIBALLEAU/AFP/Getty Images

As the United Kingdom continues to figure out its next steps in the wake of the Brexit vote, one of the many questions is how this decision will affect the way the island buys things from other countries, including the U.S.

The United Kingdom’s reliance on imported goods, including basics like food and oil, makes it the world’s ninth largest importer, according to MIT. In 2014, it imported $663 billion worth of goods, with $44.4 billion from the U.S. alone. How will this affect the U.S. industries selling these items? For some companies, like car manufacturers, uncertainty around the island’s future will likely curb sales. But, it’s unclear what else might happen in the long term, so companies are probably paying close attention to the changing economic landscape overseas.

Here are just a few of the ways U.S. companies do business with the U.K.:

About half of cars imported to the U.K. come from Germany (see: VW, BMW, Mercedes), but some U.S.-based companies have plants and operations on the island. Ford and is one of the companies that may take a sales hit because of Brexit concerns, and that’s a big deal. Ford employs about 14,000 employees in the U.K. and Ford cars are the most popular on the roads in Britain.

Ford’s subsidiary, Ford of Britain, runs three manufacturing sites in the UK. Here’s what Ford said after the Brexit vote:

“Ford’s priority has always been the need to maintain a stable trading environment so that we can continue building a strong and sustainably profitable business in the U.K. and Europe, and provide a more secure future for our nearly 14,000 direct employees in the U.K. We will continue working toward this goal with key stakeholders in the U.K. and across the other Member States and EU institutions to ensure they understand our concerns, which mirror those of the majority of the U.K. and European auto industry.”

The U.K.imported more than $9 billion worth from a host of different countries, but like the auto industry, many U.S.-based companies have offices in London, including Johnson and Johnson. The company is a pretty household name. It’s in the top 50 of the Fortune 500 and brings in tens of billions of dollars in sales every year. The company’s largest segment is pharmaceuticals and it employs over 5,000 people in the U.K. Johnson and Johnson said this about Brexit:

“We respect the democratic decision of the United Kingdom public to exit the European Union and are carefully considering the potential long-term impact,” said Ernie Knewitz, spokesperson for Johnson & Johnson. “Our objective is to minimize any disruption for the consumers, patients and members of the healthcare community who rely on our products and services, as well as for our employees.”

The U.S. is “a leading supplier of diagnostic, dental, orthopedic equipment and high quality wound care products to the UK,” according to the U.S. Department of Commerce’s International Trade Administration. Medtronic, the world’s largest maker of heart-rhythm devices, was founded in Minneapolis but is now based in Dublin, Ireland (and reaps a lot of tax benefits from the move). They’ve been on a bit of a spending spree of late, acquiring HeartWare International for about $1.1 billion, The Wall Street Journal reported Monday. Medtronic said this about Brexit.

We have been watching with interest the recent vote in the United Kingdom to leave the European Union, and we will continue to monitor the situation. We believe the fact that this vote will not become effective for two years will provide us ample to time assess its impact and respond as necessary.

Computers is fifth on the list of top U.K. imports. Hewlett Packard has offices in London and sales outside the U.S. make up more than half of the company’s revenue, according to its 2014 annual report. In HP’s latest annual statement, the company qualifies international projections, noting that “political or economic changes or other factors could harm our future revenue, costs and expenses, and financial condition.”

“HP is carefully assessing the Brexit situation to better understand its business and economic impact. In the meantime, we continue to actively move forward with day-to-day operations supporting employees, customers and partners.”