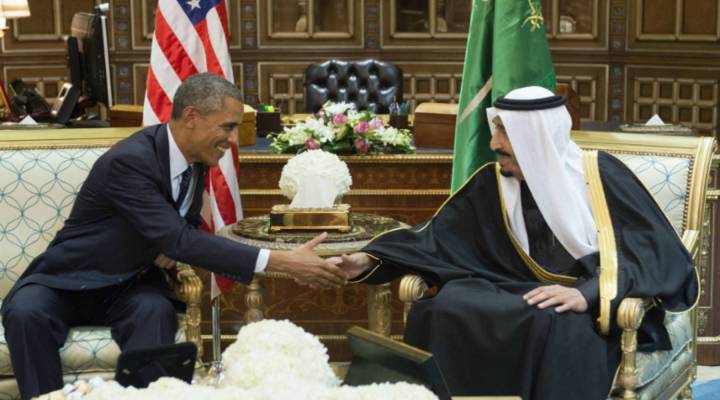 COPY
President Obama at a meeting with King Salman in January of last year. When asked in a recent interview with The Atlantic if the Saudis are America's friends, the president said, "It's complicated." SAUL LOEB/AFP/Getty Images

President Obama at a meeting with King Salman in January of last year. When asked in a recent interview with The Atlantic if the Saudis are America's friends, the president said, "It's complicated." SAUL LOEB/AFP/Getty Images
Listen Now

President Obama is headed to Saudi Arabia for a meeting Wednesday with the country’s leader, King Salman, and with other state leaders of the Gulf Cooperation Council on Thursday.

“President Obama, as far as the Saudis are concerned, has a lot of explaining to do,” said Manning, thanks to an article in this month’s Atlantic magazine, in which the president is reported as saying, “It’s complicated,” when asked if the Saudis are America’s friends.

“There’s a lot of concern [in the Gulf region] that the U.S. is on its way out of the Middle East,” Manning said. “That it’s not viewed in terms of our national security priorities as it once was.”

The Saudis are also deeply suspicious of the U.S. nuclear agreement with Iran, said Manning.

“It’s a region of conspiracies. When we did the deal with Iran, the preeminent conspiracy theory in the region was somehow the U.S. is shifting allegiances and going back to Iran as its ally in the region, and moving away from the Gulf. That wasn’t true, but that was the suspicion,” he said.

But the president wants the Saudis to put more focus elsewhere, said Steven Cook of the Council on Foreign Relations. “The agenda is going to focus mostly on the fight against the Islamic State.”

Oil prices will also come up. “President Obama thinks oil prices are too low. An argument can be made that…they’re affecting the stability of other major oil producers,” Cook said.

Low oil prices around the world and oil-exporting countries’ inability to agree on production caps are also hurting oil companies here in the U.S.