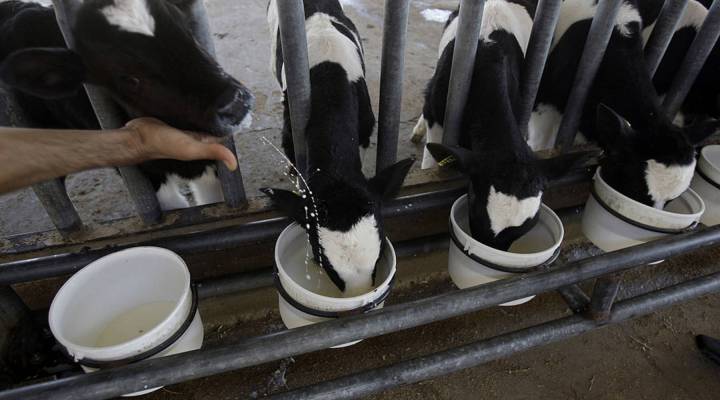 When you think of the dairy industry, you probably picture Wisconsin and cheese hats or “happy cows” in California. You might not think Saudi Arabia, but that country has some of the largest farms in the world. It takes a lot of food and water to keep those cows and that’s a problem when you live in a desert. Saudi Arabian dairy companies have relied on imported crops like alfalfa, more which will be coming from the U.S.

Say you’re in Dubai, and you’ve got a sudden hankering for yogurt. It’ll probably come from Saudi Arabia.

“If you travel throughout the Gulf, you will see Saudi dairy products all over the place,” said Jean Francois Seznec, a senior fellow at the Atlantic Council. “That’s a big industry in the region.”

Feeding Saudi cattle isn’t easy, especially since the government announced it will stop growing all fodder within three years to save water. Seznec said the material must be imported.

“If they need food for these cattle, well, maybe it’s worth the money, because they have to feed the darn things,” he said. “And it may make some sense to bring it somehow by container loads to Saudi Arabia.”

Africa looked like a potential growing field. In 2009, about 150,000 square miles of land changed hands. But Robert Tashima at the Oxford Business Group said most of those deals haven’t borne crops.

“There were only probably about 20 percent that had actually made it to the farming stage even a couple of years later,” Tashima said.

Tashima said constraints such as infrastructure problems and questions of ownership made African farming less viable. That may be why Saudi dairy company Almarai is buying land in Arizona and California — 14,000 acres so far.

“The higher upfront costs of investing in some place like Arizona or California are warranted, because they have fewer challenges to face,” Tashima said.

Much of the land will be for water-intensive alfalfa — in a region in the midst of a record drought.

In California, the Saudi land is within the Palo Verde Irrigation District, which has senior water rights along the Colorado River. Richard Gilmore, assistant manager of the district, said the senior rights make it more possible to deliver requested water to customers like Almarai.

“We have that number one priority,” Gilmore said. “We get what we need.”