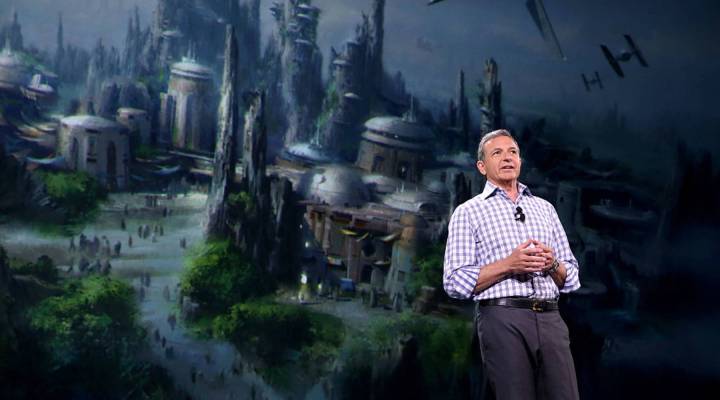 The Walt Disney Company Chairman and CEO Bob Iger presents at the D23 EXPO in Anaheim, California in 2015. Jesse Grant/Getty Images for Disney

The Walt Disney Company Chairman and CEO Bob Iger presents at the D23 EXPO in Anaheim, California in 2015. Jesse Grant/Getty Images for Disney

The Walt Disney Corporation surprised industry-watchers Monday with the announcement that COO Thomas Staggs, heir apparent to CEO Bob Iger, will step down this spring.

This disrupts Disney’s succession plans, which have always been rocky, the New York Times noted. Iger’s contract is up in 2018, and Staggs was his handpicked successor, though he hadn’t been approved by the board. Staggs ran Disney’s theme park business before moving into Iger’s on-deck circle, but he doesn’t have a creative record to match his business chops. That might have hurt Stagg’s chances, the Los Angeles Times reported, and he’s getting out before he can be officially passed over.

Disney likes to promote from within, and when Staggs got the COO job last year, two rivals left the company. That leaves Disney without an obvious successor, and facing an outside search for the first time. We’ve dug through the flurry of speculation and rounded up a shortlist of potential candidates. You’re welcome, Disney.

The Facebook COO serves on the Disney board now, and she’s among the most-mentioned contenders for Iger’s job. At 46, Sandberg is the youngest rumored candidate and her years of experience in Silicon Valley — she was previously a VP at Google — could help Disney through the years of digital disruption still to come. Sandberg’s lack of creative experience could be a hindrance, however.

The impressively mustachioed executive vice chairman at 21st Century Fox had an impressive run as COO and ran DirecTV for six years. But he’s spent the better part of his career at NewsCorp, and he’s only a couple years younger than Iger, making it unlikely he’d move over to Disney’s top job for the long-term.

The same’s true of CBS CEO Les Moonves, who’s been at the company for two decades. The long succession fight and recent chairmanship shake-up around CBS and Viacom mogul Sumner Redstone might be the only reason Moonves’ name is floating around. Still, it seems unlikely he would jump ship.

One of two confirmed noes came from Steve Burke, president and CEO of NBCUniversal. Anonymous sources told the LA Times he’s not interested in the job. Burke worked at the Mouse House decades ago, the Hollywood Reporter notes, and he was actually in line for the CEO job when Comcast made a play to acquire Disney.

Peter Chernin was COO at NewsCorp before Carey and ran Fox and 20th Century Fox. Now he’s something of a free agent, producing and investing though his own Chernin Group. Sources told the Hollywood Reporter he’s not interested in another corporate job.

Without any one standout candidate, many are speculating Iger might just have to stick around a few more years. After all, he’s delayed retirement three times before, and he’s one of the most successful CEOs in the business right now, quadrupling Disney’s stock price and overseeing acquisitions of Pixar, Marvel and Lucasfilm during his tenure. Plus, with the failure of his NFL stadium proposal in Carson, California, Iger’s post-retirement plans might be scuttled anyway.