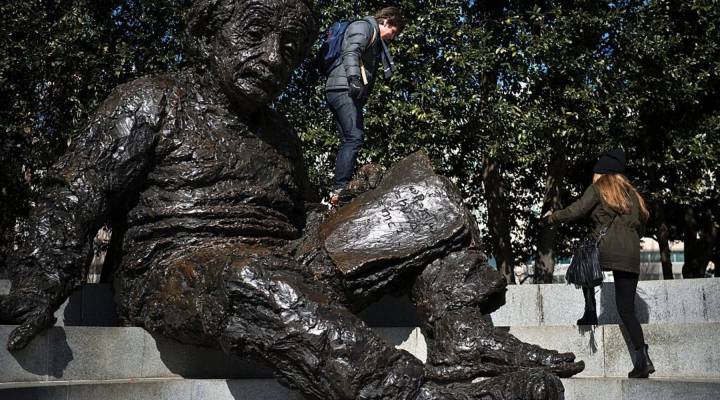 Thursday’s historic announcement of the first recorded gravitational waves was heralded by headlines like “Albert Einstein was right.”

The ripples across space and time were among the most controversial aspects to his theory of relativity, and it took more than a century for scientists to prove they existed. That’s made it a busy day for the people managing Einstein’s image — his verified Twitter account posted this shortly after the announcement:

If Einstein were alive, he’d totally do a mic drop after today’s #LIGO conference on #gravitationalwaves. #NSFLigo pic.twitter.com/0vaAxVXxvt

That got us curious about Einstein’s estate. Forbes says it made $11 million last year, and it’s ranked as among the most profitable for years. All that money goes to Hebrew University in Jerusalem, which Einstein helped found and which now maintains his archive. But the school isn’t exactly out there hawking posters and “Little Einsteins” DVDs, much less posting on Instagram. That job goes to Corbis Entertainment, a New York-based branding firm that’s been the exclusive authorized representative of the Einstein estate.

Anthony Iliakostas is the business affairs manager for its rights group and, it turns out, the guy who tweeted about Einstein dropping the mic. This interview has been condensed and edited for clarity.

So what exactly does Corbis do for Einstein?

Hebrew University maintains the rights, and they have the ability to say yes or no to any use of Einstein’s image, personality rights and any copyrighted content he has. So our role is to help aggregate all those requests. We work closely with the estate with all those requests.

The other side of our representation is the social media management, we handle the Einstein Twitter, Facebook and Instagram accounts, and we have a YouTube page as well. On Facebook we’re at just about 17.5 million followers. Twitter, we just passed 40,000 followers and on Instagram we’re approaching 300,000 followers. You can make the argument that millennials give a hoot about Einstein and that’s great. He’s still so relevant.

Were you an Einstein fan before you started?

The extent of my knowledge of Einstein was “E=mc2,” and that was back in 11th grade physics — that was about it. I actually went to law school, I graduated in 2014 and I was very passionate about intellectual property in the media, entertainment, sports spectrum. I would definitely say my knowledge of Einstein as the person, as a philosopher and the physicist has increased since I started working here.

So you handle the requests, freeing up the University to maintain the archives and help fund itself with the licencing fees?

The estate manages all the papers, the Albert Einstein archive is manned by a wonderful team over there, they have everything from his Nobel prize to journals.

In essence we’re the middle man, we’re the spokesperson to the estates. We convey all the requests to them, we convey the thoughts of the estate to the brand, and at the same time the brand tells us what they think what they want. So we’re sort of the liaison for both parties, but we obviously have a more vested interest in representing the estate.

What are these kinds of licensing deals worth?

We’re usually not at liberty to disclose even ballpark figures, and I may not be privy to all the numbers. I can tell you for sure that Einstein is one of our most profitable talents on our roster and we have a pretty diverse roster. He’s a very nice addition to our roster, financially, but I think that’s the extent of what I can share.

How many requests do you get in a year for these kinds of famous, dead clients?

It’s hard to estimate. Collectively for the talent that we have, it’s definitely in the thousands. We get a lot of requests. If we want to speak more narrowly on Einstein, we’re definitely getting hundreds of requests [yearly]. Whether it’s someone wanting to use him as set decor in a movie, somebody wants to use him in an ad campaign for television or somebody wants to use him on a billboard or something like that, they’ll definitely come to us. Sometimes those requests will flourish into deals that will close, other times they won’t, but that’s the nature of the business.

Are you involved whenever someone is playing Einstein in a movie?

Einstein’s personality rights are alive and well, so any time there would be some type of use of that personality right, that’s something we would have to weigh. Since I started working here last year I’ve seen that Einstein is being used as set decor more than anything else. Whether they use him in the background of a shot, if they make a mention to him in the script, and they make a concerted effort to point to picture of him or they’re reading a book of Einstein’s, that’s something that would require us to review. And if it’s in good taste and it’s something that the Einstein estate approves, we go forward with that request.

Are you expecting a big jump in requests after today’s announcement?

Einstein was relevant before today’s discovery, and I think he’s become even more relevant today. The fact that this announcement came out validates one of the key components of the theory of general relativity; it’s pretty much definite at this point. So now potentially brands who want to make merchandise will say “Wow, he’s making the news, maybe we should hop on that opportunity.” Business has been great for us, even before today’s announcement and I expect it to be at least the same, if not better.

Correction: Due to a transcription error, a previous version of this story misquoted Iliakostas on his knowledge about Einstein before working at Corbis. The text has been updated.