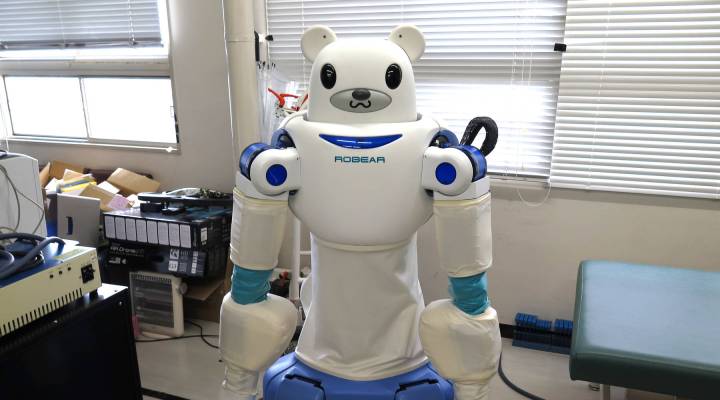 COPY
Is this the future of senior care? Japan thinks it may be.  Sally Herships

Is this the future of senior care? Japan thinks it may be.  Sally Herships
Listen Now

There’s jello for lunch at the Keijuen nursing home in Tokyo. The care home, as it’s known in Japan, looks a lot like one of its American counterparts. There are tissue paper flowers on the walls and residents in wheelchairs are gathered around tables in the cafeteria watching TV. But there’s also a waiting list to get in.  If you’re on it, you could be waiting for years. The list is eight pages long.

Special bathtubs to accommodate the disabled at the Keijuen nursing home in Tokyo, cost about seven million yen, or about $60,000 each. But a larger problem is finding workers to help staff such nursing homes.

Every month local governments send out updated lists like these to to nursing homes around the country, said the home’s manager, Hirofumi Yamada.

“So the people who can stay at this facility, they are the lucky ones. In Setagaya City, there are almost 1,000 people who have to stay at home, although they need care,” he said.

Japan is growing old – fast. According to the World Bank, about a quarter of the country’s population is over the age of 65.  But at the same time, Japan’s birthrate is plummeting. Traditionally, seniors were cared for by their children, but now the elderly are living longer, the young have to work and Japan is running out of caretakers for its aging population. It’s a  growing issue around the world, but in Japan the problem has become acute.

Fumihisa Tobashi, a care worker at the Keijuen nursing home in Tokyo, helped care for his own grandparents so he knows how difficult the work is. ‘At the time I had to take care of their toilet. I had to change diapers,’ he said.  ‘Here there are 40 people on this floor, and we have limited number of staff. So sometimes I feel very nervous because there are things that have to be done but because of the shortage of people we can’t help them.’

A resident’s room at the Keijuen nursing home in Tokyo.  According to the Japanese government, by 2060 almost 40 percent of the country will be 65 or older.

As for plans for his own future, when he’s elderly and may need care, Yamada said he hasn’t thought about it yet.

If the guy who runs the nursing home isn’t thinking about it, then who is? In Japan it used to be common for families to live together across generations – mom, dad, kids and grandparents. But now the traditional family structure is changing, and more and more Japanese are living alone.  That leads to another problem. There’s even a word in Japanese for it. Kodokushi means “lonely death” — when you die alone and no one finds your body for days or even weeks.

“So in Tokyo 4,000 senior citizens die alone each year, so that means about ten people per day,” said Takamasa Fujiwara, who works for the Tokyo Council for Social Welfare, a non-profit that matches volunteers with activities, who spoke through a translator.

Volunteers with the senior social network Silver Bell volunteer do laughter yoga with other seniors.

While volunteers work with seniors, doing activities like laughter yoga, and support groups for busy working families abound, there’s still a tremendous shortage of resources for the elderly.

“Senior citizens are used to be taken care of by their families. So this is quite new problem. And Japanese people are quite shocked and don’t know what to do,” he said.

If you’re thinking this is a problem with an easy solution — that Japan is desperate for workers and that people around the world need jobs — it’s not that simple.

In the small city of Kamaishi a group of women sat around a table, eating snacks at a weekly meeting for seniors.  While Japan often gets accused of xenophobia, part of the concern over foreign workers is practical. We all hate paperwork. Now imagine trying to fill out insurance forms in Japanese when it’s your second language.  One of the women in Kamaishi tried to explain her unease with the help of a translator.

“We’re really concerned. We have nothing against their coming in to help us,” she said of the possibility of being cared for by foreigners. “Whether there’s going to be smooth communication with the caretakers. Whether they understand what we want. So it’s really maybe a matter of language and communication.”

Whatever you call it, the country has been reluctant to let in outsiders. Only 1.5 percent of Japan’s population is made up of immigrants.

“Maybe if you’re used to always being touched by foreign people that’s one thing,” said another attendee of the meeting, “but otherwise it’s going to be very difficult.” She continued, describing a Philippine neighbor, “she was fluent in Japanese, but still, she wasn’t Japanese. And for us, I wouldn’t deny that there was a little bit strangeness between her, and there was a slight distance between her and the rest of us, so for us to accept that kind of foreign aid might be a little bit difficult,” she said.

Sakakida, 75, is a resident of the Keijukai Senior Citizen home. ‘I am satisfied with living here, but actually I wish to live with my family,’ he said.

Seniors are dying alone. Japan is out of workers and uncomfortable with foreigners. But there is one last option — robots.

Robear is a shiny white Japanese-made medical robot. Developed in part by Dr. Toshiharu Mukai, a professor of  Meijo University’s department of information engineering, Robear stands about four feet tall, has long arms and looks like a bear. But a robotic one that just rolled out of a Disney movie. Mukai said the government wants to design robots for nursing care. But, he said, if you’re imagining a Japan where an army of cheerful, shiny robots are taking care of smiling seniors think again. Robear is only three-and-a-half years old. He’s just a cub and technology still has a long way to go.

“Actually it is very difficult. We have made many robots, but few of them are really useful. So that is problem,” he said.

It’s not not easy to design technology that understands when a fragile elderly person flinches or doesn’t want to be picked up out of a hospital bed, Mukai said.

“Humans [are] very special. It’s difficult to get function over humans.” Mukai said.

Robear is made of plastic and metal, and like a real bear, he could do damage to a human — a patient or a caregiver. So attached to a long cable-like tail robear has a big red panic button. It can turn the robot off immediately in case there’s a problem.

Haru Ohara, 93. She took care of her own mother for 35 years but now lives in a nursing home. She says it was a big job to care for her mother and wishes that at the time, she’d had access to the facility like the one she now lives in.

‘I really like staying here, because I can spend my time on my hobby, which is origami, folding paper,’ Ohara said.

Ten years ago, the Tokyo Voluntary Action Center took a survey of elderly living alone. One message read “Lonely, so lonely. I can’t stand it. Please help me, someone!”

The woman who wrote this entry  “had strokes three times, and her children lived far away from her,” said Mikiko Yamazaki, president of the Tokyo Voluntary Action Center via a translator. “So she is very worried about herself and lonely.”

One day, said Dr. Mukai, perhaps in about ten years, robots should be able to do jobs like lifting, or moving patients.  But in the meantime, said Yamazaki, loneliness, and isolation continue to be a problem for seniors left on their own.

The government, said Yamazaki, provides pensions and health insurance – services that cover older Japanese.  What the country lacks is people.

This story comes to us through a collaboration with the international radio and multimedia project “Bending Borders.”