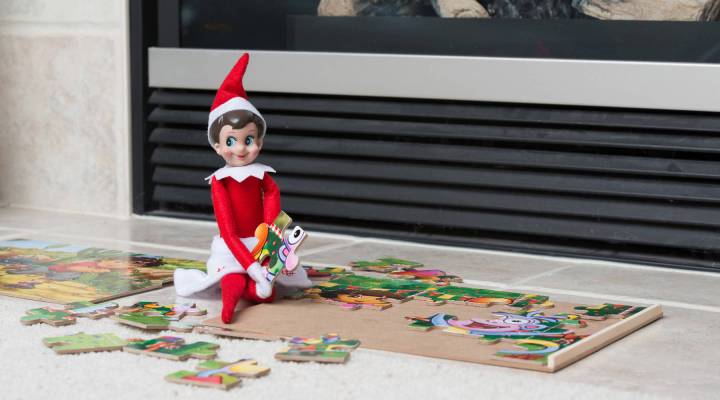 COPY
Every copy of "The Elf on the Shelf" comes with an elf. Mark Baylor/flickr/Creative Commons

Every copy of "The Elf on the Shelf" comes with an elf. Mark Baylor/flickr/Creative Commons
Listen Now

“The Elf on the Shelf: A Christmas Tradition” is a children’s picture book that explains how Santa Claus knows who has been naughty or nice. It’s about the elves that work for Santa who are adopted into children’s families to watch the kids and report back to Santa. Each book comes with a small toy elf and has become a new tradition in many family homes.

Co-author Chanda Bell discusses how the book came to be.

On how the book was funded:

I remember this was at a stage in my own life where I was a stay at home mom and my husband is a school teacher. My budget for every two weeks at the grocery store with diapers and formula was $150 every two weeks. There really was no money from anywhere, but what my husband and I did have was good credit… we ended up actually opening up our first initial order of 5,000 units and we used personal credit cards to pay for it.

My sister had sold her house in Pennsylvania at the time and was ready to move back to Georgia and made a little money on that and helped put that towards the first 5,000 books. My parents had a very small retirement account and they cleared that out, so between the three of us we were able to cobble up enough just to put this first 5,000 units out into the universe. Looking back, I think it was absolutely the right plan for us.

On the criticism that “Elf on the Shelf” gets children used to the idea of being spied on:

I say take it up with Santa Claus! The idea that Santa knows who’s naughty or nice or what children are doing has been around for a hundred years. That’s not something that we created or invented. I also think it’s how someone presents this to a child. Just like you write letters to Santa, this elf takes messages back. It’s about the fun and the excitement of the holidays. I think we as grownups take it all too seriously sometimes and try to make something far more out of it than it is.