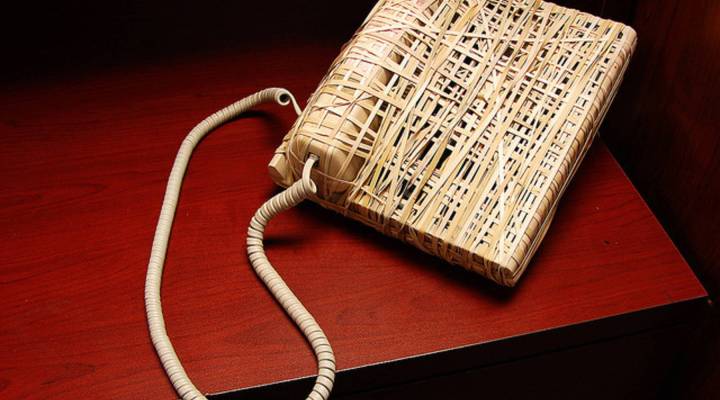 Please hold while I explain the music you’re hearing

When it comes to being put on hold, silence is not golden. Matt Reinbold/Flickr
I've Always Wondered ...

Please hold while I explain the music you’re hearing

When it comes to being put on hold, silence is not golden. Matt Reinbold/Flickr

If you’re like Marketplace listener Karen Gutierrez, the only thing you want to hear less than the words “Hold, please” is the music that gets played while you wait for a customer service representative. It’s why Gutierrez wrote in with the following question:

Why is customer service “music on hold” still of such poor quality?

So why can’t businesses just play the latest track from “1989”? As Taylor Swift might say:

“This is about the young songwriter who just got his or her first cut and thought that the royalties from that would get them out of debt. This is about the producer who works tirelessly to innovate and create … but will not get paid for a quarter of a year’s worth of plays on his or her songs.”

OK, so maybe that’s not exactly what we’re talking about in this case — that’s an excerpt from Taylor Swift’s Tumblr post to Apple, after all — but the point is: Artists have to get paid if music is being played in what’s legally considered a “public performance.”

“Public performance, under the copyright law, is defined as the performance or display at a place open to the public,” said Pamela Williams, vice president of business affairs at Broadcast Music Inc. That includes playing recorded music for anyone outside of a circle of family and friends. Hold music, I’m looking at you.

A lot of businesses get themselves into trouble by misunderstanding what counts as “public performance.” Restaurants that want ambient music, stores that want to energize customers with peppy songs, businesses that want to play customers a tune while they wait — all of this requires music licensing.

And as Tim Brown of Easy On Hold points out, that gets pretty complicated, pretty fast. “In the United States, we have three different providers of these licenses. If you’re sure if you’re just playing a song licensed by BMI, then you can just pay BMI. But if you’re playing a variety of songs, there’s no way for you to really be able to track all that. It gets to be a hassle.

Which is why most businesses just find it easier to go through a company like his, which offer licenses via businesses that churn out music composed specifically for this purpose.

“We have an agreement with a specific provider of this kind of music…. So we continue to pay the licenses on behalf of our customers,” he said. Companies like Brown’s also work with clients to record custom messages to try and make use of the time customers spend on hold.

Even so, Brown knows what you might be thinking.

“If I say to somebody, ‘I make music on hold messages,’ they would say, ‘I hate those.'” He said when it comes to hold music, you get what you pay for, and not all hold music is created equal. If you hear bad music, he said, chances are that company didn’t work with a very high quality music source. “They’re kind of cheaping out. They’re using those little synthesizer drones.”

Still, something is better than nothing.

“A lot of the new phone systems come with a pre-existing music bed … they tend to not be very good,” said Doug Bauguss, president of America on Hold. But he cited industry studies that found that being placed on hold with no music changes your perception of time — silence makes you feel like more time has passed. So when it comes to hold music, something, anything, is better than nothing.