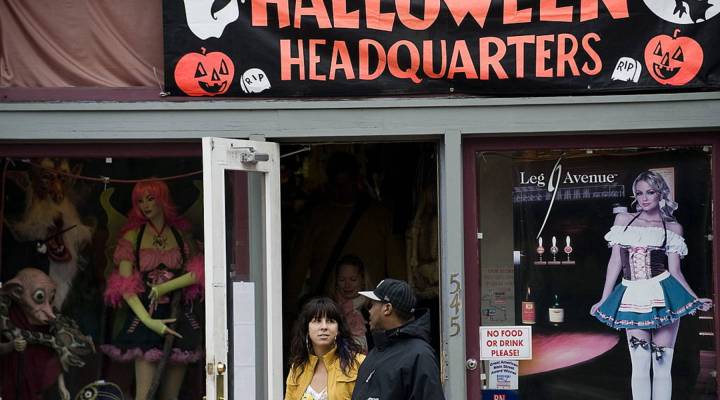 Americans will spend $2.5 billion on Halloween costumes this year, according to a National Retail Federation forecast. A pile of that money will pass through the curious seasonal phenomenon that is the Halloween pop-up store. Packed with costumes innocent and otherwise, they appear in storefronts and shopping centers across the country, before disappearing like ghosts in the night after Halloween.

Marketplace listener Derrick Trent of Dillsburg, Pennsylvania was curious about how they work. For an answer, he turned to Marketplace and our series, I’ve Always Wondered.

To find out, we visited one company that has long cashed in on Halloween costumes: Ricky’s NYC, an iconic beauty store with dozens of locations around the city. This time of year, it grows, opening up a dozen pop-up stores specializing in Halloween costumes.

Staffers ring up customers and are constantly restocking the shelves. Ricky’s hires nearly 200 seasonal employees for Halloween. In the final days leading up to Halloween, stores sometimes hit capacity, leading to a nightclub-like line unfurling outside. The place is packed with everything needed to become a monster, mummy, superhero or space alien. Ricky’s president Richard Parrott says Star Wars costumers are especially hot this year.

He’s not the Ricky the store is named after. But he totally looks the part. He’s got a killer multi-colored manicure and is getting his hair dyed red later. Parrott says Halloween provides about 10 percent of yearly sales. Running a pop-up store is a way to make more money off Halloween hype without having to cram year-round stores with costumes. And data he gets from pop-ups give him insight on customers and potential new permanent locations, not to mention fantastic publicity.

“As a growth tool and as a customer acquisition tool, it’s really something you can’t buy or manufacture,” Parrott said. “It has an incredible value to our brand equity.”

Other companies are just in the business of Halloween, places like Halloween City, Halloween Express and Spirit Halloween. It’s a big business. Spirit alone runs 1,100 seasonal stores in North America, launching a temporary real-estate search every year in January.

Halloween retailers can often get good short-term deals, but it’s not that they’re renting sketchy spots. Whether in urban or suburban areas, they go for highly visible spots with heavy traffic. There’s a funny thing about commercial real estate. One would expect storefronts to be vacant when the real estate market is weak. But sometimes they’re empty when the market is hot. Real estate professionals have a concept called optionality. Lynne Sagalyn, director of the MBA real estate program at Columbia Business School, explained it while eyeballing the Spirit location on New York’s Upper West Side.

“Quite simply, it means if I rent today, I won’t be able to rent tomorrow,” Sagalyn said. “With leases that are 5, 7, 10 or 15 years long, if you rent at what a landlord thinks is too early, you’ll miss maybe higher prices later on.”

Vacant spaces may have tenants who want in. But the locations stay empty because landlords are betting on prices to rise. Renting to a Halloween store lets them make some money without getting locked in at today’s price. The short-term arrangement is just what Halloween retailer needs.

“A lot of these seasonal stores couldn’t make it if they had to rent for a long period of time,” Sagalyn added.

It’s a symbiotic relationship between optimistic landlords and specialized retailers, kind of like the goofy peanut butter and jelly couples costume Spirit sells, with a giant wearable slice of bread for each person.

As it happens, a certain real estate professor turned politician is a wildly popular Halloween costume inspiration this year. From wigs to masks, everything related to Donald Trump is flying off the shelves. Like many other stores in New York, this Spirit location sold out.

“There are going to be a lot of Donald Trumps out there come Halloween night,” said Vince Pape, Spirit’s district sales manager.

An army of drunken Trumps haunting America’s streets. Fittingly, it’s all made possible by the spooky world of real estate.