Thanks to the ready availability of natural gas, some states are considering freezing, rolling back or eliminating Renewable Portfolio Standards — standards that tell utilities how much of their electricity has to come from renewable sources. Roughly 30 states have such guidelines. Back when many of these standards were put in place, they were seen as a way to hedge against the uncertainty of fossil fuels.

Michigan utilities met the state’s standard this year, generating 10 percent of its electricity from renewable sources. Now, to reduce carbon emissions, some people in the state want to see the bar raised to 20 percent or higher, but paying for it remains controversial.

“What we found is that doubling our RPS would add about $1.70 per month for a typical consumer,” says Jeremiah Johnson, a professor at the School of Natural Resources at the University of Michigan.

According to his research, the cost per household to double Michigan’s RPS is relatively small, as is the cost to industry, say for example, a car company.

“A Ford that was manufactured solely in Michigan, the cost of that doubling would be less than $10 per car,” he says. “So, it’s not zero but it’s very small in the scope of the cost of an automobile.”

But raising rates just isn’t something utilities like to do. DTE Energy, Michigan’s largest utility, has lobbied hard in the state legislature to freeze Michigan’s RPS in place.

“You know, we count pennies,” says Dave Harwood, DTE’s director of renewable energy. “So when you’re talking about $3, that’s a big deal to us, to put that on a customer bill. Can Michigan do more than 10 percent? Yeah, they can, and we will be doing more as we comply with future federal regulations on carbon emissions,” he says.

Harwood notes that DTE is already moving to meet stricter federal standards for power plants and adding state mandates on top of the federal guidelines that aren’t necessary.

Eliminating RPS targets has become a key focus among conservative groups, such as the American Legislative Exchange Council.

“It’s the position of ALEC that renewable energy deployment and use should expand according to customer demand,” says John Eick, ALEC’s director of energy, environment and agriculture.

Legislation bearing ALEC’s influence has been voted on by legislatures in Kansas, Texas, Ohio and North Carolina. Meanwhile California’s Gov. Jerry Brown drew headlines for his plan to increase California’s standard to 50 percent. 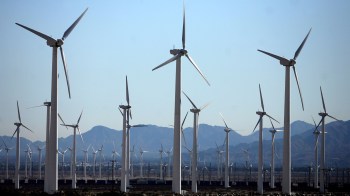