Cider makers think Vermont could be their Napa Valley

Cider makers think Vermont could be their Napa Valley

Consumption of hard cider in the United States has been growing, thanks in large part to women and millennials. Part of the appeal has been dietary. People on paleo and gluten-free diets can imbibe. But hard cider appeals to locavores and consumers committed to craft brewing. In Vermont, where eating local is practically the state motto, craft cider makers are thriving.

At Citizen Cider in Burlington there are 10 different ciders on tap. Co-founder Kris Nelson poured your thirsty correspondent a Brose, which is cider fermented with whole blueberries.

“It doesn’t drink like a blueberry wine or a cider,” Nelson explains. “It drinks more like a bubbly Rosé from southern France.”

Citizen Cider is eager for local farmers to grow apples just for cider-making. But here’s the problem: farmers get far less for the smaller, blemished apples used to make cider than they get for so-called dessert fruit, which commands a price around $25 a bushel. According to University of Vermont researcher Terry Bradshaw, apple growers in Vermont are being cautious about the emerging cider market.

“There are some orchards in the state that are planted for this market,” said Bradshaw, who makes hard cider at his home in Calais, VT. “But nobody is putting in a sizable orchard just because the economics aren’t really figured out yet.”

Production and infrastructure costs are lower for cider apple orchards, but it take several years for new orchards to become productive. Citizen Cider president Justin Heilenbach is confident that the market will adapt.

The hard cider industry expects that in the next decade, cider will rise from 1 percent of the beer market to 5 percent. 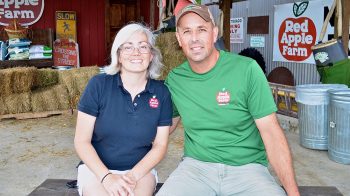