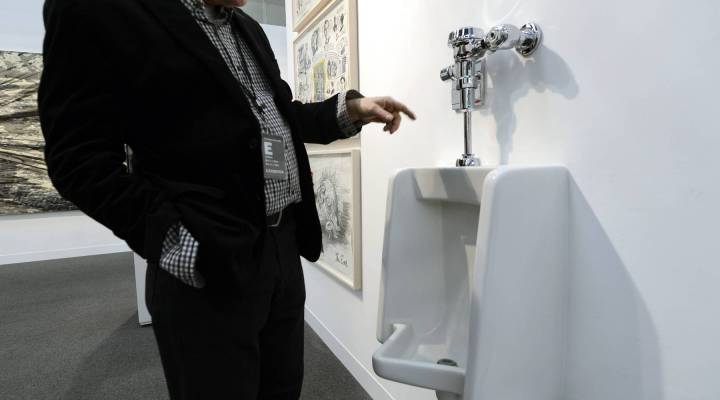 Nowadays, urinals – a somewhat primitive bathroom fixture – come in all different shapes and sizes. You can even get one coated in 24-karat gold leaf. And for the latest installment in our series “I’ve Always Wondered,” we head to the men’s room to tackle one listener’s question.

It comes from Mike Dolan, who is in the military, but first and foremost, he’s a guy. “So my I’ve always wondered, why do you never see a urinal in a private home? I have a friend, my college buddy, who has four boys. That’s five males in a house, and they’re constantly flushing toilets and wasting all that water. And it’s like why don’t you just get a urinal?” Dolan asks.

Turns out they’re out there.

Marci Jones, manager of the showroom at GLS Plumbing Supply in Birmingham, Alabama, has sold a few on occasion. “It would be for the man-cave in the basement where the man’s going to be all the time, and this is something he’s always wanted in his home,” Jones says, “and the wife says, ‘OK, we’ll do it downstairs.’”

They remain uncommon fixtures in the home because “most women do not want urinals in their master bath,” Jones says.

Jones had some customers in the showroom, Terry and Eddie Higginbotham, that she used to make her point. With couples, the discussion about whether to put a urinal in the house usually goes something like this:

“Would you like a urinal in your bathroom?” Jones asks Eddie. “Yes,” he says. “I’ve always thought about having one in my bathroom, because it does use less water. And it’s like a jet, it’s like, ‘KUSHH!'”

Homes with urinals are hard to find. I asked around and started getting odd tips, which brought me to the house of Al Troncalli. Grace Troncalli, Al’s sister, inherited the house when Al passed away.

“Look at this bathroom,” she says, “Is this the most gorgeous thing you’ve ever seen?” There is a urinal in here. And let’s just say Grace and a man she once dated appreciated it.

Even though they haven’t caught on in homes, urinals in some form have been around for centuries. The French even made them sound elegant. “The first ‘pissoirs’ as they were called, which were actually just barrels, were instituted under Napoleon III in the 1840s. This was part of his attempt to sort of clean up Paris,” says Andrew Howe, chairman of the history department at La Sierra University in Riverside, California.

Fast forward about 25 years to the United States, right after the Civil War. Howe says there was a huge population explosion, and workers took to the factories. Dumping urine by hand into rivers and behind bushes was impractical and gross. So in 1866 Andrew Rankin patented today’s urinal, which connected to a sewage system.

“A lot of these factories and business owners put in bathrooms. And the urinal was much more space-saving than a sit-down toilet,” Howe says. “Much of the workforce was male, [so] urinals made a lot of sense.”

But wives were often making the decisions about the home, and why would they choose to have a urinal? Since it can’t replace a toilet, it was a luxury item … one that many women still don’t like.

Back to our listener, Mike Dolan, and his buddy with four boys. Michele Marsden in Berryville, Virginia, is the mother of those four boys and says there’s no way she’d install a urinal in the house. “I think it’s ugly,” she says. “I think it’s absolutely ugly, yes.”

The answer was no.

That brings us to the big question: Does a urinal save money? John Koeller, an engineer who studies the water efficiency of toilets and other fixtures, says a urinal won’t save you much “in terms of the dollars on your water bill.” While urinals use less water – as little as a pint per flush compared to a modern toilet that uses somewhere around 1.3 gallons per flush – a urinal would save you less than $40 a year.

Your best bet, according to Koeller:  “Get a dual flush toilet.”

It saves money, it saves water. And guys, it’ll save you grief from the women in your life.