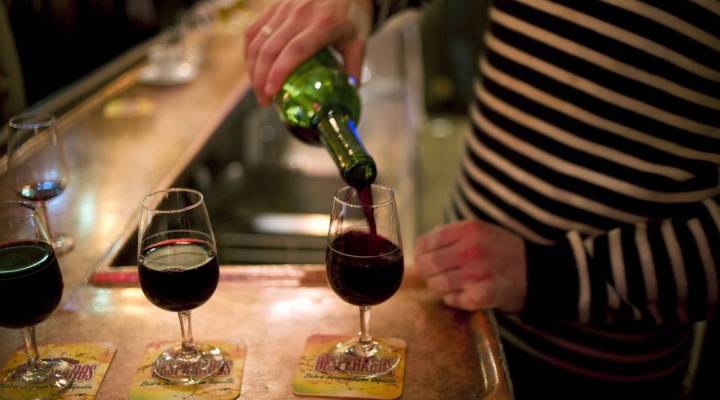 COPY
A waiter serves glasses of red wine at the counter of a bar in Paris. FRED DUFOUR/AFP/Getty Images

A waiter serves glasses of red wine at the counter of a bar in Paris. FRED DUFOUR/AFP/Getty Images
Listen Now

We’re doing a series of explainers of economic concepts to mark Marketplace’s 25th anniversary, and today we take a look at the Trade Deficit.

The United States has been running one one every year since oh… 1974. Currently, it’s about $40 billion or so a month, give or take a few billion.

Depends on what, exactly?

Well, before we can answer that we have to explain why it’s so neutral-ish in the first place. The reason is that trade deficits have this whole other side to them that is not obvious at all.

The double life of a trade deficit

Let’s say the U.S. and Europe have a trade deficit (which they do)—meaning America imports tons of French wine, let’s say, but exports almost nothing to Europe.

Wine stores across the U.S. will place their orders with wineries in Europe for massive quantities of Beaujolais and Chardonnay. And they will, of course, need to pay in Euros. French wineries don’t want a stack of Benjamins any more than you want that damn Turkish lira that somehow always ends up in your bag of change when you are trying to pay a toll on the freeway.

The price of rejection

Here’s the problem: We have a trade deficit. We aren’t exporting much to Europe—As in, Europe isn’t buying our stuff, which means they don’t need dollars. Why would they need dollars? To use as paper weights?

How do we deal with this problem?

Now, you can imagine one way out of this. American banks might have to lower the price of the dollar. They might say ‘Fine, world! What if I give you $110 for $100 euros? $120?  $150?,’ until finally someone in Europe decided that was a really good deal and they could use some dollars to maybe buy some American goods. It’s a kind of auto correct feature that trade deficits can have.

“When the dollar falls, that stimulates U.S. exports, it discourages U.S. imports, and that fall in the value of the dollar will naturally begin to close the trade deficit,” says Irwin.
This can happen with trade deficits—they can push down a currency’s value.

The money has to come from somewhere

But that’s not happening with the U.S., nor is it happening with a lot of countries. The dollar is doing great. And yet we continue to import much more than they export. Somehow we are finding another way to deal with the problem that we can’t get Europeans to exchange our dollars so we can buy European wine.

The fact is, there ARE people abroad who want to give us Euros in exchange for dollars. These are not people who want to buy our stuff, though. These are people who need dollars…because….drum roll…. they want to INVEST in America. They’re investors.

Investors need U.S. dollars to buy U.S. assets: treasury bills, real estate, stocks, bonds, etc. After all, the NASDAQ doesn’t take Euros, so foreign investors need dollars to park their money in the U.S. and make a profit just like we need euros to buy wine.

That’s how the U.S. economy finds the euros go import crazy. So if we are having a trade deficit, it is a sign that someone abroad is investing in some part of our economy. A trade deficit and investment are like two sides of a strange coin. We buy goods from the world, the world invests in us.

This invisible connection between trade deficits and foreign investments is why a trade deficit can be good or bad—all it  means for sure is that other countries are coming to you to invest their money. That can be great if it’s growing your economy or it can be bad if it’s not—you can’t tell what’s going on just from having a trade deficit.

An example of a trade deficit that was happening for good reasons was the U.S. during the 19th century, says Robert Lawrence, who teaches international trade at Harvard’s Kennedy School. The U.S. had increasing trade deficits, which were made possible by investors pouring in money from abroad. “The United States used the money to build rail roads and build the U.S. economy—so you can look in retrospect and say that was a pretty healthy deficit.”

An example of a trade deficit that was happening for less good reasons is Greece, he says. During the financial crisis, Greece was running a trade deficit made possible by investors who were pouring money in to purchase government debt. “During the global financial crisis, in Greece the government accumulated large debts—so large, in fact, that they couldn’t repay them.”

Sometimes it can be ok to finance government debt, but if something scares investors and they all take their money out at once (like happened in Southeast Asia in the late 90s) that can spark a crisis. In cases like those, a trade deficit can be a sign of vulnerability.

So a trade deficit strictly speaking means investors are parking their money with you. Whether it’s good or bad depends on what you (or they) are doing with the money.

The U.S. is lucky because investors keep coming back. As long as they do, we can import more than we export.