Americans plan to spend about $7 billion dollars on Halloween this fall. A good chunk of that change will be spent at spooky attractions.

The creep-out factor starts at the entrance to Dark Hour Haunted House’s Halloween Show in Plano, Texas, as a 9-foot-tall furry bat sneaks up on a woman buying tickets.  In a dark corner, an animatronic witch tells a scary story and stirs a steaming cauldron.

More than one in five Americans plans to visit a spooky attraction this year, according to the National Retail Federation. They’re looking for an adrenaline rush.

Hopps tries to make Dark Hour different by not relying on the standard themes – think movies like “The Texas Chainsaw Massacre” and “The Hills Have Eyes.”

“Haunted houses will always have a redneck, cannibal and inbred theme,” he says. “That’s the easiest and cheapest to do because all your costumes are thrift stores, all of your makeup is blood and dirt, and you’re covered. So you’re going to see that everywhere.”

So instead of chainsaw sounds and clowns, Dark Hour has tunnels that spin as you walk through, and werewolves with fangs that glow.

Hopps also mixes in the quiet buzzing sound of bees to add to the creepy music.

“Scaring people has become a global industry,” says Larry Kirchner. He builds terror attractions across the world, including Creepyworld — the largest haunted attraction in the Midwest. On a good year, his creations bring in around $4 million to $5 million dollars.

Kirchner designed his first haunted house in 4th grade. Back then cold spaghetti for guts and peeled grapes for eyeballs would do. Today, he says there are high-tech ghost tours, paintball zombie attacks, even extreme haunts where actors tie you up and pretend to torture you.

“Halloween used to be this holiday where you would carve a pumpkin, watch a horror movie and go trick or treating,” Kirchner says, “Now you’ve got everyone trying to exploit it.”

And, in the past, a 10-minute adventure was just fine, visitors today expect a haunted house to be a full evening’s entertainment.

At Dark Hour in Texas, the maze takes nearly 40 minutes to walk through. And after you’re done, you get a music performance: Zombies, on stage, performing Michael Jackson’s Thriller. 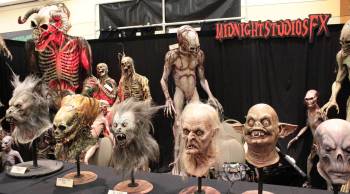