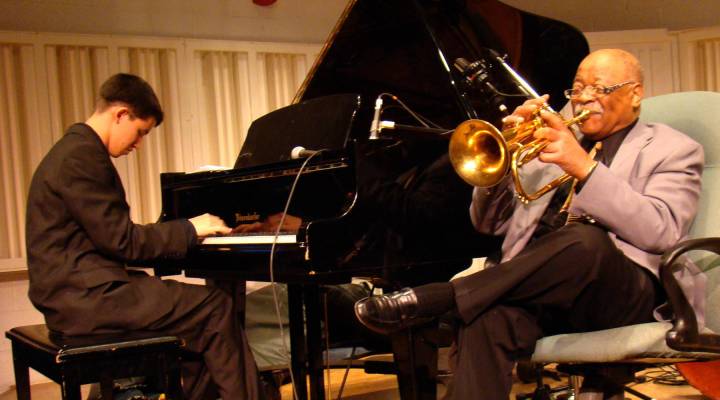 Quincy Jones on Clark Terry, a godfather of jazz

COPY
Justin Kauflin and Clark Terry in "Keep on Keepin' On." Courtesy:RADiUS-TWC

Quincy Jones on Clark Terry, a godfather of jazz

Justin Kauflin and Clark Terry in "Keep on Keepin' On." Courtesy:RADiUS-TWC
Listen Now

Update: Jazz musician Clark Terry died on Saturday at the age of 94. Terry was known for integrating “The Tonight Show” Band back in 1960, and taught jazz to Miles Davis, Winton Marsalis and Quincy Jones, who joined the show to discuss the legacy of Terry.

It’s unlikely that someone outside the jazz scene would cite Clark Terry if asked to name an influential jazz musician. That’s something legendary music producer Quincy Jones and documentary filmmaker Alan Hicks hope to change.

The two have paired up to make “Keep on Keepin’ On,” a documentary that explains Terry’s role in shaping American jazz music and follows Terry’s work with one of his students.

Both Jones and Hicks agree Terry is one of the best trumpet players ever. He played with Duke Ellington, Ella Fitzgerald, Dizzy Gillespie, Billie Holiday and many more. He was also a member of Johnny Carson’s house band, the NBC Orchestra.

Hicks realized early on that to really illustrate Terry’s greatest legacy, they’d have to show him teaching.

Terry was known to be generous with his time with developing musicians. His students include Miles Davis, Herbie Hancock and Jones himself.

“I was 12, and I studied with him when I was 13,” Jones says. He remembers skipping school in Seattle to hang out with jazz musicians.

“Seattle was perfect to hang out with guys like Clark, and I begged him to give me a lesson,” he says.

Terry and a student, pianist Justin Kauflin, share a special bond. Kauflin has been blind since he was 11, and Terry went blind more recently after a lifetime of diabetes. In the documentary, the two work through the ups and downs of trying to launch Kauflin’s jazz career.

Jones says that’s harder to do now than back when he started.

“Back then, you couldn’t get away from jazz,” Jones says. “It was in the air, the water. Today, they have to resist the pressure of their peers to say, ‘Let’s go see Lil’ Wayne, Jay-Z and Kanye [West].” 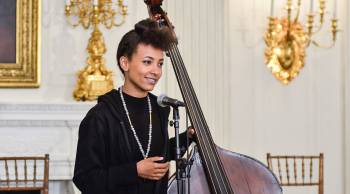