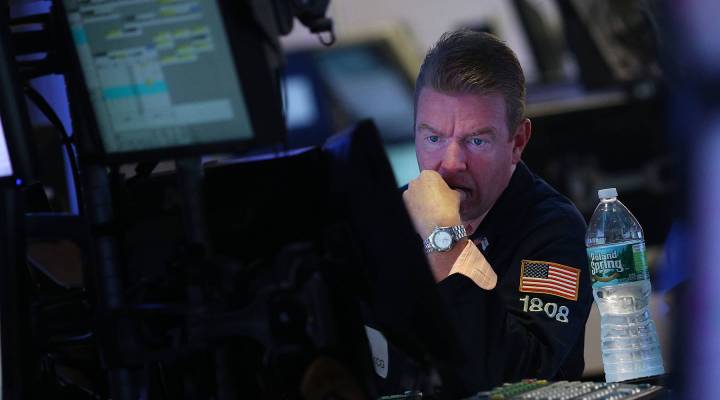 Markets have been setting records pretty much every other week for months, investors are making record money… and Wall Street?

“I think it’s really tough, even for people who are really good at it, to be honest,” says Jesse Marrus, president of StreetID, a financial careers service. He says jobs on Wall Street have been drying up. “It’s definitely an ‘eat what you kill’ business, so there are people losing their positions in that space.”

Why is there less of a killing to be made for Wall Street workers?

“Trading volumes are way lower than they were,” explains Max Wolff, chief economist at Citizen VC. Trading volumes – a.k.a. how many trades are done per day – is where Wall Street makes its money. Fewer trades mean a lot fewer commissions. Trading volume has been really low since the financial crisis. Last year, the number of trades was a third lower than it was in 2009.

A big reason for the low trading volume is the low level of investor enthusiasm. “It’s no secret that this is one of the world’s most hated rallies,” says Wolff. “It’s been pretty clear that the markets got well ahead of the macroeconomic health of the U.S. and they’ve stayed there. And everyone kept waiting for this correction that didn’t come and slowly, begrudgingly people jumped on board, because they couldn’t afford just to watch other people make money forever. But they didn’t believe in it and they definitely don’t want to catch the elevator ride down that everyone’s afraid may come.”

So investors are putting their money in the markets and leaving it there: They’re not buying a hot new stock or selling it off based on a hot tip. Instead, they’re buying and holding. “For there to be trades, there have to be differences of opinion,” says Lawrence White, a professor of Economics at the NYU Stern School of Business. “Somebody has to think, ‘It’s a good time to buy!’ and somebody else has to think, ‘It’s a good time to sell!’ When trading volumes are lower, it just means there’s less diversity of opinion, more consensus.”

All of that consensus has had a very chilling impact on Wall Street. “It’s really alarming for the people who are in the broker/dealer seats that really rely on the trading volumes,” says Marrus. “Despite the record highs, it’s still really hard for them to make the commissions that they were making and make the livings that they were making because the volume’s low and the volatilities are so low.”

But even if volatility and volume come back, Wall Street workers probably won’t be back to the good old days. Electronic trading has replaced brokers and traders to a large extent and the future Wall Street broker will probably look a lot more like Hal than a power player in a pin-striped suit.