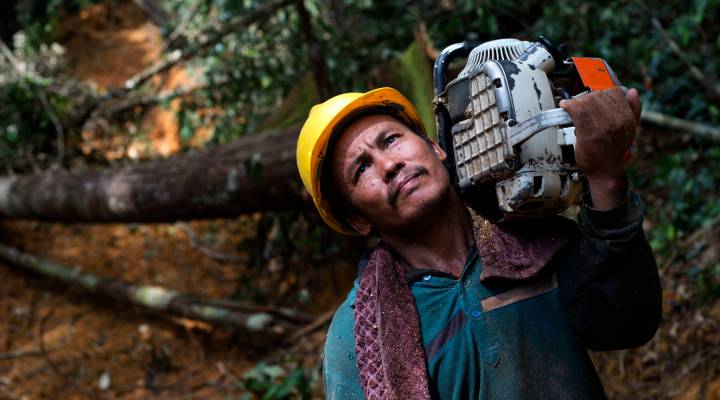 COPY
This photo taken on November 13, 2013 shows a timber company worker carrying a chainsaw in the forests of Berau, East Kalimantan, in Indonesia. A new app looks to use cellphones to detect illegal loggers.  (BAY ISMOYO/AFP/Getty Images)

This photo taken on November 13, 2013 shows a timber company worker carrying a chainsaw in the forests of Berau, East Kalimantan, in Indonesia. A new app looks to use cellphones to detect illegal loggers.  (BAY ISMOYO/AFP/Getty Images)
Listen Now

Illegal logging has been a worldwide problem for conservationists, as it is often only possible to tell that logging has occurred once it has already happened. But Topher White, CEO and founder of Rainforest Connection, has an innovative solution: use cellphones to listen for the sounds of trees being cut down.

The hardware consists of a black box with the phone located inside. “Petals” located on the outside of the box act as solar panels, maximizing the brief flashes of light in the rainforest bed. The generated power then goes to microphones attached to the phone, which in turn listens for the sounds of trees being cut.

While it might sound daunting to pick out the exact sounds, it is far from impossible.

“With a chainsaw, they do have an internal combustion engine, which turns at about 110 times per second, so we are able to pick out these spikes that occur at very set frequencies,” Topher says.

The sound is then uploaded — even at the edges, forests do have cell service — to the cloud, where it is analyzed, and sent to local law enforcement.

Topher is currently looking to fund an expansion of the project on Kickstarter.