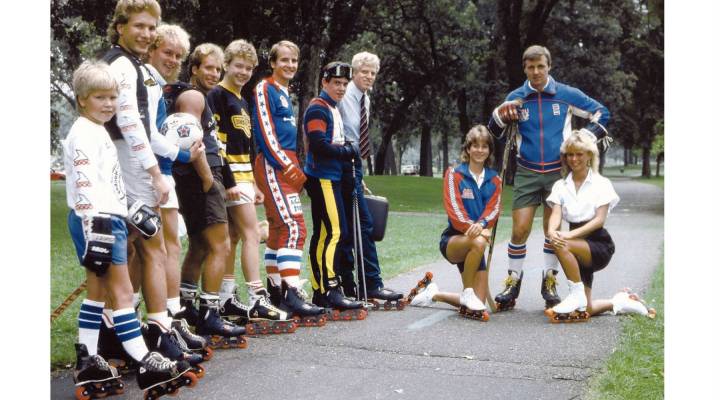 How a 19-year-old started the Rollerblade revolution

COPY
Scott Olson (second from left), the Rollerblade revolutionizer, sports his Rollerblades with his family and friends. Provided by Scott Olson
Brought to You By

How a 19-year-old started the Rollerblade revolution

Scott Olson (second from left), the Rollerblade revolutionizer, sports his Rollerblades with his family and friends. Provided by Scott Olson
Listen Now

There’s a large plot of land tucked in the woods of Waconia, Minnesota that has been home to some very interesting inventions.

It’s the birthplace of a giant, outdoor version of ping pong called Kong Pong; a bike that can be rowed instead of peddled (dubbed, fittingly, Rowbike); a globe-enclosed bed made for sleeping under the stars named LunarBed, plastic penguin lawn ornaments that waddle in the wind, and hundreds of feet of suspended track that can send you peddling or rowing through the air in a device called Skyride.

The brain behind all of these products is Scott Olson. He lives in a barn on this playground property that he converted into a house, with no air conditioning and one small heater. It’s a quiet lifestyle for a man who has been forging inventions for 30 years. His first? One that would make him wealthy and go down in history as one of the top 100 products of the 21st century according to Time Magazine: Rollerblades.

But Olson is quick to point out that he didn’t invent inline skates, or even the concept.

“The inline skate started back before roller skates were even invented, back in the early 1800s,” Olson says.

Olson was just 19 when he stumbled across a pair of inline skates in a catalog while playing junior hockey in Canada. He dreamed of being an NHL goalie, and thought they would be a great way to train in the summer. When he got home to his Minneapolis suburb, his brother had picked up a pair and was skating all over the driveway.

Olson tried them on and knew right away they would be a huge hit. But they hadn’t been so far – SSS had been producing the skates for years, and the guy who ran the local sporting goods shop said the few pairs he had in stock had been collecting dust for years. No one was buying them.

So Olson began tinkering. He made the wheels softer and faster, and put them on a track that could be attached to hockey skates. When he got nowhere peddling his new product at local sporting goods stores, he started approaching hockey players and coaches directly. He offered them a money back guarantee, and soon players all over the Minneapolis suburbs were zipping around on Olson’s creation.

Olson bought a patent off of a Chicago company and eventually crafted a more comfortable and sturdy boot. In 1981, he formed a company and named it Rollerblade, an obvious nod to the hybrid between roller and hockey skates.

“A lot of people thought Rollerblades must’ve started in Southern California,” Olson says. “But in reality, it started in Minneapolis, Minnesota, hockey capital of the world.”

Olson wore his creation everywhere, and when people saw how fast and effortless the skates were, Rollerblades sold themselves, first in the hockey community and then rippling outward.

Olson hired his friends to work for him, and one of them ended up embezzling from him. He was on the brink of losing the company altogether when two investors made him a deal. They would keep the brand alive and give him a tiny percent. Olson says he made enough money to live comfortably for the rest of his life.

He now spends his time dreaming up new inventions like the ones that are strewn about his Waconia farm.

Rollerblade sales shot up to $10 million in 1988 and the industry peaked at nearly half a billion dollars in the 1990s. But by the early 2000s, popularity slumped, and sales have waned steadily since.

Olson says even though he doesn’t have a stake in the company anymore, he’s still frustrated that you don’t see as many of them as you used to.

“I haven’t figured it out, but I think like a lot of product,s they kind of go in cycles,” Olson says. “Skateboards and roller skates in their day would climb and drop off and climb again. What we need right now is a hit in one a movie out in (Hollywood). We need somebody taking those blades out and using them like they’re meant to be used.”

Olson may be waiting for the American Rollerblade resurgence, but the skates are still popular in some places. In fact the people of France have been described as “obsessed.”