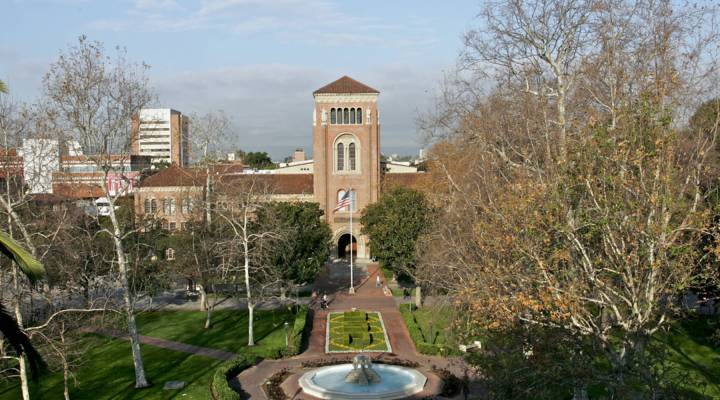 A long road from foster care to college

A long road from foster care to college

Lucero Noyola’s high school GPA – a flat 2.0 – reflects a life in two halves. When she started high school, Noyola was a troubled kid who cut class, experimented with drugs, and had been hauled to court for assaulting a classmate.

When she finished high school, life was far from perfect, but she was earnings straight As and was on a path toward the University of Southern California.

Noyola’s parents, immigrants from Mexico, worked full-time. They were often out of the house and in their absence, there was chaos. When her older brother entered high school, he started bringing home friends – boys and young men who used the family’s house as a place to hang out.

“I guess our home was attractive because there were no parents around, and they would hang out there and do what they didn’t want to do around their own parents,” Noyola said.

That included drugs. By the time she was 16, Noyola had experimented with pot, methamphetamines and cocaine. She and her twin sister, following in the footsteps of the young men around them, solved their problems by fighting.

“We were not dramatic girls, like the rest of the girls,” Noyola said. “All that relational aggression – it was just different for us. It was physical.”

Her early teen years were a blur of juvenile halls, house arrests, and, once, a camp for troubled youths, where Noyola remembers with horror, that even clothing was communal.

“The articles of clothing were so disgusting,” Noyola said. “They were re-used. People would fight over new underwear and pretty jackets. It was gross and dirty there.”

At sixteen, Lucero was removed from her parents care and sent to a group home. Her time in foster care would prove life-changing. At the Crittenton home in Fullerton, California, Lucero says she was, for the first time, treated like an individual who needed guidance, rather than a criminal. She was given her own room, and space for her belongings.

Joyce Capelle, CEO of Crittenton Services, says the organization understands there is sometimes a disconnect between the front that a troubled young person puts on, and what’s actually going on inside.

“It’s not unusual to have a really tough-talking sixteen-year-old who trash talks and wants to be all of that and makes it sound like they’re forty, but at Christmas the thing they want is Cinderalla sheets,” said Capelle.

At Crittenton, the young residents were taken on field trips. Noyola remembers one, in particular, to the campus of California State University, Fullerton. “The campus was gorgeous,” Noyola said.  “I had never been anywhere big, pretty, fancy. I had never realized people had lives like that.”

Noyola began applying herself in school and took a job as a campus aide at the group home. When she returned to her parents’ house, life was far from perfect, but she had a new goal: to improve her image.

“People see you by who you are on paper,” Noyola said. “A lot of the adults I was around would have a paper in front of them, and judge me by that. I was motivated, at that point, to turn it around.”

At eighteen, after she gave birth to her daugther, Lucero’s father took her to apply for aid. There, she had something like an ephiphany.

“I was sitting there and I realized there were a lot of homeless people,” she said. “And I was like, no. I don’t want to be like this. I don’t want to live like this. They’re just going to be giving me two hundred dollars a month and some bus tokens and food stamps. See what life you can live with this. I didn’t want it.”

She asked her father to pick her up and take her instead to East Los Angeles college, a two-year school.

Her grades in community college were high enough to ensure her entry into the University of Southern California. Once there, she found that no one at the private university was familiar with the paperwork needed to ensure she could continue recieving TANF support while in school. That support was critical in helping her to afford daycare. So, she turned to Trojan Guardian Scholars, an on-campus support group at USC that helps former foster youth transition to life in college. Advisors with the Trojan Guardian Scholars helped her get the necessary paperwork.

Today, Noyola has a 3.5 GPA, a double major in pyschology and sociology, and a summer research internship in Dubai, studying migrant domestic workers. If she can continue to juggle motherhood, work, and her finances, she’d like to enter a PhD program. As for her future plans, she says, “Professor Noyola” sounds pretty good to her.