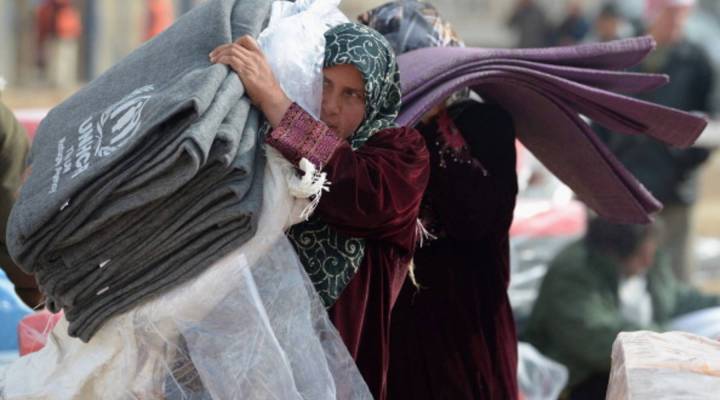 COPY
Refugees from Syria collect blankets and supplies from the UNHCR as they arrive at the Za’atari refugee camp on January 30, 2013 in Mafrq, Jordan. Jeff J Mitchell/Getty Images

Refugees from Syria collect blankets and supplies from the UNHCR as they arrive at the Za’atari refugee camp on January 30, 2013 in Mafrq, Jordan. Jeff J Mitchell/Getty Images
Listen Now

The war in Syria has sparked one of the worst humanitarian crises in the world. Millions of people have fled their homes and are in need of assistance.

Humanitarian organizations say raising money for victims of a complex conflict can be a challenge, particularly when compared to a dramatic natural disaster.

“In the case of the Haiti earthquake, Oxfam America was able to raise over $30 million from the American public,” said Noah Gottschalk, a senior humanitarian policy advisor with Oxfam. “Most recently, with Typhoon Haiyan, we we’ve raised over $6 million. In the case of Syria, we’ve raised less than $1 million.”

Syria’s conflict, by the numbers

| refugees registered with the UNCHR

| displaced inside of Syria

| in need of aid inside Syria

| living in hard-to-reach areas inside of Syria

Some aid groups have begun a new approach: attempts to “bring the conflict home” to donors, by asking them to imagine if it was them — or their children — who needed help.

Save the Children released this video, of a young girl whose life is shattered by war. She is British, not Syrian, and it is set in London, not Damascus. The video has 26 million views so far, and donations to Save the Children’s peer-to-peer network more than quadrupled upon its release.

SOS Children’s Villages, meanwhile, saw a video produced by the organization’s Norwegian chapter go unexpectedly viral. “Would you give Johannes your jacket?” the video asks, and shows strangers interacting on hidden camera with a shivering boy alone at a bus stop on a winter day in Oslo. The video was intended for Norwegian viewers, but to date it has 13 million viewers from across the world. What was expected to be a small, local appeal has instead raised more than $350,000.

Have you experienced sexual harassment at work? Tell us about it