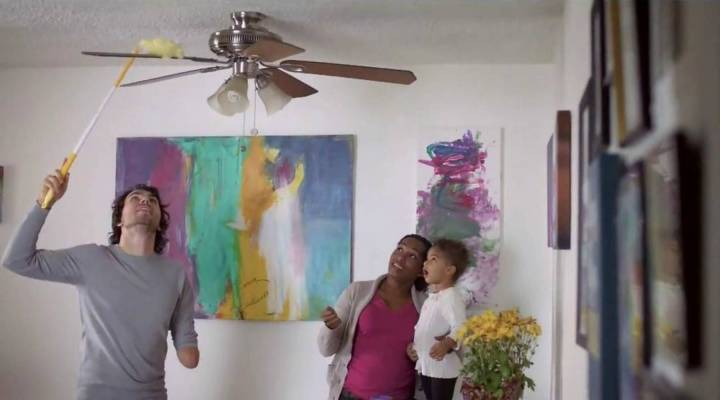 There I was just watching TV when out of nowhere, he appeared: The guy with one arm selling Swiffer dusters. When I first saw him, I didn’t know that his name was Zack Rukavina. Or that he’d lost his arm to cancer. Or that I was watching him interact with his real family while he spoke about all the ways Swiffer helps him help out around the house.

All I knew was that the commercial I was watching was compelling in a way I hadn’t experienced as a TV viewer before.

Had I seen a person with a disability in a mainstream commercial before? Most likely. Certainly war veterans, paralympians and the elderly have been cast to push products from sneakers to remote alarm systems.

But, what struck me about the Swiffer ad was that his disability wasn’t the highlight of the commercial. It was certainly what got my attention, but by the end of that 30-second spot, I was remembering more about how Zack poked fun at his wife for being a terrible housekeeper and the way his two adorable children seemed to vie for his attention in every scene. The commercial didn’t provoke pity, embarrassment or portray its leading man as any kind of superhero. The Rukavinas are a totally normal family and that’s what Swiffer was successful at conveying. That and if you must dust, don’t skimp on the brand name.

Diversity in commercial advertising still has a long way to go in reflecting the appearances and experiences of America’s various populations. However the Swiffer ad and others seem to be stepping into reality TV territory – more inclusive casting choices, less pretending that we all look, sound and behave alike in our homes and communities. The much buzzed-about Cheerios ad featuring an interracial family is another example of this, as is this advertisement starring a 62-year-old underwear model in American Apparel.

So, after all these years of using overtly sexy, impossibly flawless images to push products, what do companies have to gain by keeping it real now? And how does that affect the consumer experience?

Maybe the mad men are finally figuring out what many of us have known all along.

“Well, it’s about time that Madison Avenue and advertisers are really embracing the reality of what America is today,” says Ann Christine Diaz, Creativity Editor at AdAge. “It’s no longer the case that the all-American family is a Ralph Lauren ad. You know, if you look at the changing demographics and the changing population of America, or at least of the major metropolitan cities, families are growing more and more diverse so I think it’s only a smart move for advertisers to embrace that reality.”

“With the rise of the voice of the consumer empowered by social media, advertisers are having to be more real, get more real because there are so many people now who can keep them in check about what their messages are,” she says.

For companies, something major can be achieved with inclusive advertising.

“There’s so many products out there so the more goodwill that you foster with consumers, the more you show them that you represent something beyond just the sell, that’s going to engender some brand loyalty among people,” Diaz says. “They’re going to turn to the brand that they like, the brand that they would be friends with, basically.”

Will I buy more Swiffer dusters in the future? I don’t know. The truth is, I hate to clean just about as much as Mrs. Rukavina. But if I do buy a Swiffer, I’ll probably think of that commercial and feel pretty darn good about it.

Have you noticed commercials “keeping it real?” Does it have an effect on you as a consumer? Join the conversation with a comment below or Tweet us @LiveMoney.