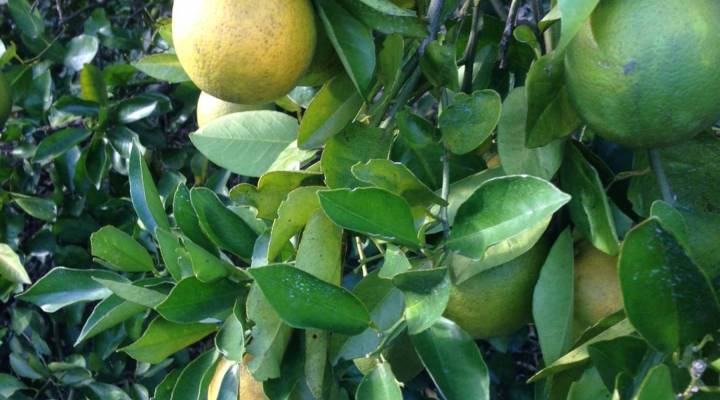 Orange is the new caviar?

Orange is the new caviar?

Americans drink half a billion gallons a year of orange juice every year. That might sound like a lot, but it’s actually a record low. OJ consumption has dropped 20 percent in the last decade. That’s prompted Florida’s Department of Citrus to roll out a new ad campaign touting orange juice’s health attributes.

Part of the reason demand is down is because there are simply fewer oranges being produced says Doug Ackerman, executive director of the FDOC. “Our challenge is the shortage of supply really creates higher prices at retail for us.”

About 50 percent higher over the last 10 years. That’s mainly due to a disease called greening.

Citrus farmer Bill Roe is examining a greening infected Valencia orange tree in his grove in Winter Haven, Florida. “This is a 5-year-old tree that’s very symptomatic,” he says, pulling off a couple of the yellowing leaves and a couple of small, misshapen pieces of fruit. Greening is a bacterial infection that slowly kills citrus trees. It showed up in the state about 8 years ago. Since then, Florida is producing half the oranges it used to. Roe says greening also causes oranges to drop off the tree prematurely.

“Half the fruit on that tree is on the ground,” he says. “That means there’s no way to make money, essentially. And the whole point of farming is to make a little bit of money. It’s a good way of life, but it’s important to make money.”

For farmers like Roe to make money with less fruit to sell and expensive greening treatments, they have to charge more for their oranges. “What happened in oranges is certainly rare and we’ve never seen it in any other market like that,” says James Cordier, a commodities trader with Liberty Trading Group. Cordier says if Florida orange production keeps falling and economies in Asia, Europe, and the U.S. improve, orange juice prices could hit luxury territory. “It could be the liquid caviar.”

Doug Ackerman, with the Florida Department of Citrus says he’s confident scientists will find a cure for greening before things get that extreme. “The Florida citrus grower has a long history of fighting very tough diseases and coming out OK on the other end,” he says. Ackerman says Florida’s citrus industry is worth about $9 billion a year and employs more than 76,000 people.

He says the Sunshine State is committed to its citrus farmers. “Well we’re still on the license plate here in Florida,” he laughs.