Why Wall Street is so excited about cheap men’s suits

Why Wall Street is so excited about cheap men’s suits

The men’s suit retailer, Jos. A. Bank, recently made an offer to buy its competitor, Men’s Warehouse. Men’s Warehouse turned down the deal but then today, two weeks after the refusal, made the same offer to Jos. A. Bank. This rare reversal is known as a “Pac-Man” defense, probably a reference to that moment in the classic video game when the ghosts go from a threat to a snack. If the deal goes through it would make the combined companies the largest men’s suit seller in the country.

Both Men’s Warehouse and Jos. A. Bank are known for selling inexpensive menswear, offering promotional deals like this one.

These chains market their clothing to the middle class. And the middle class is shrinking and demand for suits in general is down since the recession, “partly due to declining discretionary income and also partly due to high unemployment, which limited men’s needs to purchase and wear suits to the office,” says IBIS World retail analyst Nikoleta Panteva.

A merger between the two companies could help fend off competition from other brick and mortar retailers. “Some of it’s also the discount stores, which are hit and miss, like Ross, TJ Maxx, Marshalls, Steinmart, those places have some pretty good values as well,” says Andy Gilchrist, the author of The Encyclopedia of Men’s Clothing. He says more discount stores are offering name brands and that could lure customers away from Jos. A. Bank and Men’s Warehouse, together or separate. 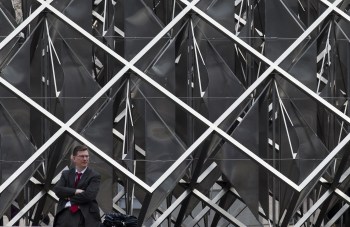