Adjusting to the new contours of the ACA

Adjusting to the new contours of the ACA

There are a few reasons:

“There is all sorts of every day minutiae involved in the insurance industry,” says Monica Lindeen, Commissioner of Securities and Insurance for the state of Montana. “Insurance companies have to actually look at new rates for those plans if they are going to be continued, which means they have to come up with a rate which has to reflect medical inflation, new provisions, fees or taxes, and once they have done all this work which they would have normally done five months ago then they file those rates with insurance departments in their states, which then have to inform the consumer so you can see our problem just in the practicality.”

She adds: “These are things that our federal government doesn’t think about.”

“You set your rates based on the expectation of who’s going to enroll and what your costs will be,” says Silvers. That’s all now up in the air.

At the same time, guess who will join the exchanges? Poor people and sick people. Without millions of healthy people in the system (because they stayed with the old policies), costs will go up for insurance companies, and possibly premiums too.

“So in reality, you may have a sicker pool, which then is going to raise rates on all those folks in 2015,” says Lindeen.

Just because people can keep their old policies, doesn’t mean they will. Vivian Ho, professor of health economics at Rice University, says that creates uncertainty for a health insurance company.

“How do I figure out what premium to charge these customers cause i just don’t know which of them are going to stay with me and which are going to leave?” says Ho.

Not to mention the logistical challenge of having multiple sets of rules for multiple groups of people. 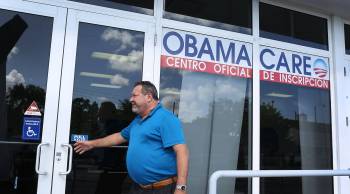