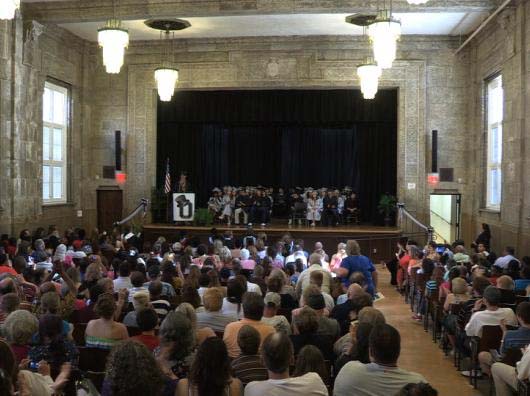 COPY
On May 15, Oyler held the first graduation in its newly restored auditorium. Amy Scott/Marketplace
One School, One Year

On May 15, Oyler held the first graduation in its newly restored auditorium. Amy Scott/Marketplace
Listen Now

It’s just a few hours till graduation, and principal Craig Hockenberry steps out for one of his last walks around the neighborhood before the school year ends.

“What’s up, Nate?” he says to the postman, making his rounds. “Graduation tonight,” Hockenberry says. “Big party on State Street.”

The neighborhood is looking good. Crews of volunteers have been clearing out trash and old tires. Hockenberry spots a row of brick houses being painted.

“We need every house done like this,” he says.

Along the way, neighbors and former students try to score tickets to the ceremony. “I’ll get you in, if you want to watch it,” he tells a young man on a bike.

Oyler is gearing up for a crowd. This is only the fourth official class to graduate from the high school.

“People come, whether they have kids here or not,” says Jami Luggen, Oyler’s resource coordinator. “They just come to see the success of the kids of the neighborhood.”

“It makes me a little uncomfortable because I always think of these as very solemn,” Hockenberry says. “But I’ve also got to remember that this is more than the child graduating.” It’s a day that eluded that child’s parents and grandparents, he says. “So have fun, Lower Price Hill.”

And Lower Price Hill does not disappoint. At five o’clock, the seniors file into Oyler’s packed art deco auditorium — the young men in black caps and gowns, the women in silver. A mom in shorts and a tank top crouches in front to snap pictures.

Principal Hockenberry takes the podium. “It is my pleasure and my honor to welcome you all to Oyler School, the pride of Cincinnati Public.”

The pride of Cincinnati Public. It’s how he answers the phone, signs his emails. It’s all part of Hockenberry’s campaign to turn things around at Oyler — the reality and the perception.

“There was a lot of lack of pride in this community and this neighborhood,” he says. “I personally believe if you say something enough, that you slowly start to believe it.”

As students have made steady progress on test scores, he says people don’t laugh anymore. But he knows Oyler has a long way to go. It’s ranked in the bottom five percent of schools in the state. That’s partly because its official graduation rate — the percentage of kids who start in 9th grade and finish in four years — is so low. Less than 36 percent last year.

But of those who make it to senior year, most cross the finish line. Forty-one students this year. One by one they walk across the stage to collect their diplomas. In a back corner, the Gribbins family erupts as Raven’s name is called. Her father, grandfather and grandmother all went to Oyler. None of them finished school.

A week before graduation, Raven was accepted at Penn State’s Greater Allegheny campus. She wants to study math and education. There’s still the very real question of how to pay for it. Even after grants and government loans, she still needs to come up with $11,000 for next year. Which probably means more debt. She sees it as the price of a better life.

“If you don’t have a college degree you’re always living paycheck to paycheck, struggling, and then you always end up doing something you don’t want to do,” she says. “So when you go get your degree, then you could do what you’d like to do.”

Most of Raven’s classmates plan to attend at least some college. A few are headed for apprenticeships or trade school. About a third will go straight into the workforce. But a lot can happen over the summer. Just before the ceremony, Hockenberry ran into one of his most promising seniors from last year. College didn’t work out.

“I see kids that graduated from Oyler that just — they didn’t make it,” he says. “So now instead of being a dropout…they’re walking the streets and doing drugs with a diploma.”

After the ceremony, everyone pours out onto Hatmaker Street. A few families fire up some barbecues for a cookout in the parking lot. The celebration is tinged with sadness. The night before an Oyler parent — with kids in preschool and kindergarten — was shot and killed in front of his house.

Hockenberry says there’s less violent crime in the neighborhood since the school reopened this year after its renovation — but it’s never far away.

“Even though we make a lot of progress here, we take steps back often,” he says. “That’s the challenge here in the inner city.”

He’ll be back next year to take up the challenge again. After the budget uncertainty a few months ago, the district renewed his contract — with a paycut. He’s already cooking up plans for next year: a dental clinic inside the school and a barber shop.

And as we talk for the last time this school year, another idea takes shape.

“It’s almost like we need an office of postsecondary, you know what I mean, to follow the kids — especially now that we’re in the hundreds.”

Kids that a decade ago may never have finished high school.

For the last year, Marketplace has been following a grand experiment in education as it unfolds at Oyler School. Read the stories here