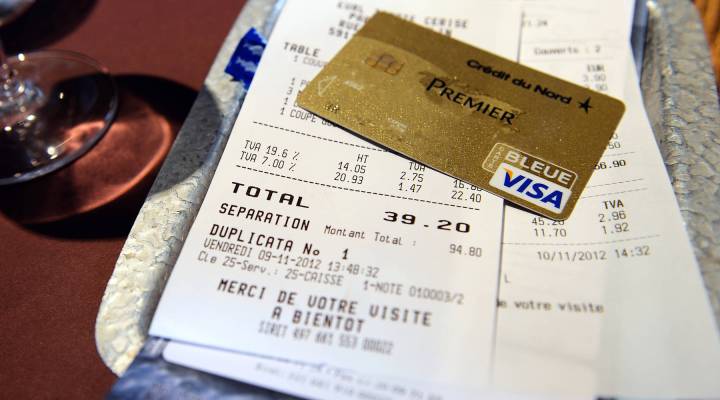 Debt ceiling is like a credit card? Think again

Debt ceiling is like a credit card? Think again

I’m not a big fan of ‘dine and dash’ analogy that President Obama used to explain our debt ceiling situation. But I’m even less of a fan of the credit card analogy used by Euro Pacific Capital’s Peter Schiff, which I received in the mail this morning.

In his press conference [Monday], President Obama said the Republican reluctance to raise the debt limit was the equivalent of a diner who had ordered and enjoyed a meal who then decides to leave the restaurant without paying. (Given how often this metaphor has been used by Democrats, it appears to be the sanctioned talking point).

But what he is really saying is that since this particular diner has no cash on hand, it would be much more responsible for him to use a credit card than to dine and dash. In taking this moral high ground the President ignores the fact that the diner (who has indebted himself through habitual restaurant meals) intends to pay his credit card bill with another card, and then repeat the process until he runs out of cards. So in the end, it’s not the restaurateur who gets stiffed, but the issuer of the last card the diner is able to acquire.

If anything, the dashing diner isn’t just one indebted person, it’s a couple: a Republican and a Democrat in a somewhat troubled relationship. That said, the president is right, in that if the Congress fails to raise the debt ceiling, we simply won’t be able to pay some of our bills, or service our debt.

But investor Peter Schiff is wrong to say it’ll be because our credit card has reached its limit. Unlike  a Visa or American Express card, the U.S. Government-issued plastic (let’s call it the CongressCard) has no limit. There’s no card provider out there saying, “You can only borrow so much…” Quite the reverse, in fact: the card provider – all those people buying Treasury bonds – have an apparently insatiable appetite for our debt. That’s right, they want to lend us more. It’s a bit like those notices you get in the mail from your card company, except these notices say: There’s no limit on your card! Keep borrowing at these low, low rates! As much as you like!

In other words, the CongressCard’s credit limit — also known as the debt ceiling — is self-imposed. We can, if we choose to, raise that limit any time we want. We don’t have to sign up for another card and pay off the old one with the new one, because the current card is good, and for now the sky is the limit. We only have one card, and we only need one card.

That’s not to say, of course, that we should keep hammering that card in the way we have been. That’s what the debt ceiling is for, to impose a little self discipline on our feuding couple. And let’s not forget that the reason our fractious red/blue couple is dining in this expensive restaurant in the first place is because they chose to go there. Together. It may have been a stupid decision, but it’s too late to argue about it when the bill arrives. They should have settled the fight before they left the house. And maybe agreed to go somewhere else for dinner. Or maybe cook at home.