What makes a city walkable?

What makes a city walkable?

What makes a city walkable? According to Jeff Speck, the author of “Walkable City: How Downtown Can Save America, One Step At A Time,” a walk has to be useful, safe, comfortable, and interesting if you’re going to get people out of their cars and onto the sidewalks.

“The pedestrian has to have a fighting chance against being hit by automobiles,” says Speck, “but also the streets need to be comfortable in the way they’re shaped by buildings, and you can’t have a bunch of blank walls and parking lots to walk by.”

Speck says that 77 percent of Millennials want to live urban cores. Of course, New York, Chicago and San Francisco have done a good job keeping their cities pedestrian-friendly, but Speck says no city has put the thought into walkability that Portland, Ore., has.

“The VMT [vehicle miles traveled] of your typical Portlander peaked in 1996,” says Speck who lauds Portland for a long-term strategy to minimize the importance of the car, “and as a result, one economist has calculated that about 3.5 percent of GDP is money saved by driving less.”

Many cities are doing good things to make their cities more walkable, but Speck says most average American cities still have a long way to go to become truly walkable. Why? The car is still the driving force in city planning.

“A city is being planned not by its mayor,” says Speck, “but by a public works director who is responding to complaints about traffic and parking.”

The majority of Americans still drive alone in a car to and from work. But in cities and states across the nation, the commuter population is turning to carpools, public transportation, walking, and bikes. Explore our interactive map on how America gets to work. 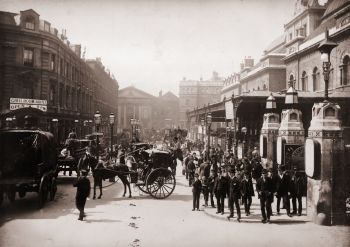