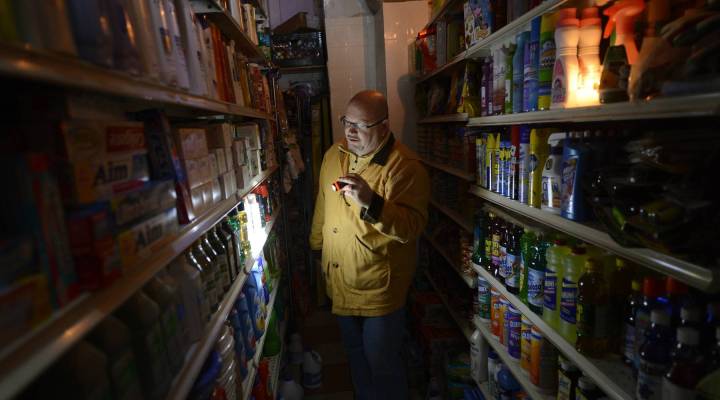 COPY
A man shops for groceries by flashlight at an East Village grocery store in New York on Oct. 30, 2012 as New Yorkers cope with the aftermath of Hurricane Sandy. TIMOTHY A. CLARY/AFP/Getty Images
Weather Economy

A man shops for groceries by flashlight at an East Village grocery store in New York on Oct. 30, 2012 as New Yorkers cope with the aftermath of Hurricane Sandy. TIMOTHY A. CLARY/AFP/Getty Images
Listen Now

Losing powering, like so many millions in the Northeast did when Sandy hit, creates some basic problems. No lights. No heat, sometimes. No stoves. Also, no money. Cash machines and credit cards swipers weren’t working. Neither were were electronic benefit transfer (EBT) cards, which hurt a lot of food stamp users.

Several days after Sandy, the Stop 1 Food market on the Lower East Side of Manhattan has reopened, and it’s taking EBT cards. That’s good news for many residents of the nearby La Guardia Housing project. A lot of them rely on food stamps.

“All the stores were closed,” says Ozzie Hernandez, one of the shoppers at Stop 1 Food. “The electricity was out. People were not able to use their EBT cards or really didn’t have any type of access to food.”

That was the case for many of 1.8 million New Yorkers who use food stamps, says Kevin Concannon, undersecretary for food nutrition and consumer services at the U.S. Department of Agriculture, which runs the food stamp program.

“Around 50 percent of the authorized stores that could process food stamps were either shut down or their power was shut down,” he says. Concannon says food stamp recipients in New York will get half of their October benefits reimbursed, and the department has also set up a backup payment system to use when the power goes out.

Farmers’ markets helped fill in for darkened or shuttered supermarkets. They were able to take EBT cards the day after the storm thanks to handheld, battery-powers card scanners.

“The people who did find us were very thankful to have us there, because it allowed them to buy some food that they didn’t have access to anywhere else,” says Marcel Van Ooyen, executive director of Grow NYC, which runs farmers’ markets in the city.

“This is a good example if you spread out, you’re getting some folks that are able to get in and provide those kinds of things when a lot of other vendors can’t,” says Mark Rank, professor of social welfare at Washington University.

He points out that it’s important to keep expanding the number of businesses that accept food stamps. Since the financial crisis, the number of people who rely onfood stamps has risen sharply. It’s now about 15 percent.