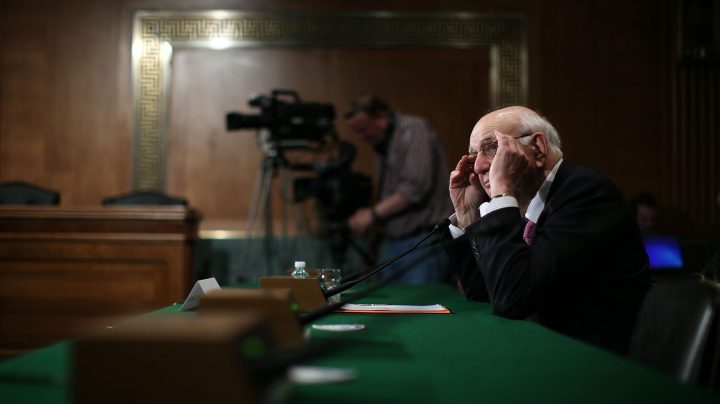 Paul Volcker is the Federal Reserve chairman who served under five American presidents, helped end the gold standard under President Nixon and warned early about the mortgage crisis. He is also the man, of course, who inspired the Volcker rule in the Dodd-Frank financial reform act.

Now Volcker is the subject of a new book called “Paul Volcker: The Triumph of Persistence” by financial historian William Silber. Both Volcker and Silber both joined “Marketplace” host Kai Ryssdal in the studio to discuss why the former Fed chief is widely considered to be the most influential Fed chairman that’s served, about the “lack of discipline in economic policymaking,” and what concerns him about today’s economy.

Kai Ryssdal: Thanks for being here, you guys.

Paul Volcker: Nice to be with you at a distance.

William Silber: Nice to be here as well.

Ryssdal: Mr. Volcker why is it that presidents keep calling and saying, ‘Help me out’? I mean, Obama did it, everybody does it.

Volcker: I’m not so sure everybody does it. You know, I was around for a while, and I guess had a certain reputation. I inspired Mr. Silber and he decided he wanted to write a book, so maybe Mr. Silber can explain that.

Ryssdal: Well what do you think, Bill Silber?

Silber: They trust him. They get some reflected credibility. And I think that’s not just true of presidents — even the baseball commissioner called on him to provide the same kind of credibility, and so did the United Nations.

Ryssdal: Well Mr. Volcker, let me ask you: How does it feel to be the guy who was perhaps not as popular while he was in office, but you’ve had quite the second act?

Volcker: I was pretty popular by the time I left office —

Ryssdal: Well by the time you left, but while you were there, you were doing things that didn’t make a whole lot of people really happy.

Volcker: At the beginning, that’s right.

Ryssdal: I talked to former President Carter a couple of years ago, and I asked him about you and him appointing you to this job. And here’s what he said, let’s play that tape:

Jimmy Carter: That was really, though, one of the most hotly debated things I did because a lot of my political advisers said ‘Don’t appoint Paul Volcker because he’s going to tighten up on everything and you will have no control at all over the Fed anymore.’

That’s pretty much it, right? You went in there, and if I read the recounting of that job interview correctly in this book, you basically said ‘I want independence and I’ve got to do what I’ve got to do.’

Volcker: It was obvious why he wanted to see me but I said, ‘Mr. President, if you’re thinking of appointing me chairman of the Federal Reserve, you have to know that I believe in a somewhat tighter monetary policy than we have been following and that my predecessors followed.

Ryssdal: The next question I asked the president, actually, was: Did you mind that he raised interest rates like that? And he said, ‘Oh no, I thought it was going to be good for the next presidential term — I just thought that that term was going to be mine, not Reagan’s.’

Volcker: I asked him once, did I cost him the election, as some people said, and he had kind of a wry smile and said, ‘Well I think there were a few other factors as well.’

Ryssdal: Mr. Volcker, let me ask you what you think then — I mean, inflation we know is a big concern of yours, but what is the biggest economic worry right now? What’s your biggest monster under the bed?

Volcker: Well the big economic worry now is not just the economic performance of the United States, but that this poor performance ranges right around the world. We have had a lack of discipline in economic policymaking and the overindebtedness of the American economy — particularly of consumers — is something you can’t cure in a hurry.

Ryssdal: Part of getting out of this financial crisis — or more importantly, not letting one happen again — is the Dodd-Frank financial reform bill in general, and specifically this thing that has come to be called the Volcker Rrule — it has your name on it — which would prevent the big investment banks —

Ryssdal: The big commercial banks from trading on their own accounts. Are you satisfied that that will keep things from getting worse again?

Volcker: That’s one element in an overall reform program. And maybe because it’s got a name on it, people interpret this and my view as being ‘this is key to the future.’ This is one element in a needed reform.

Ryssdal: Mr. Volcker, last question before I let you go: One of the big things the next president’s going to have to do — whoever that turns out to be — is appoint a successor to Mr. Bernanke. Thoughts on — if not a specific name — then what qualities that person ought to have?

Volcker: Well you look for somebody that’s had some experience, I think, in the world of finance and the world of business —

Silber: No, no, no. I’m interrupting: Backbone.

Volcker: I was going to get there.

Silber: It took you too long! Backbone.

Ryssdal: Paul Volcker is, of course, Paul Volcker. He’s the subject of a new biography by William Silber, who’s a financial historian and a professor at the Stern School of Business at NYU. Gentlemen, thanks a lot for your time. Appreciate it.

Marketplace Whiteboard®Shelf Life
Tags in this Story
Share this Story