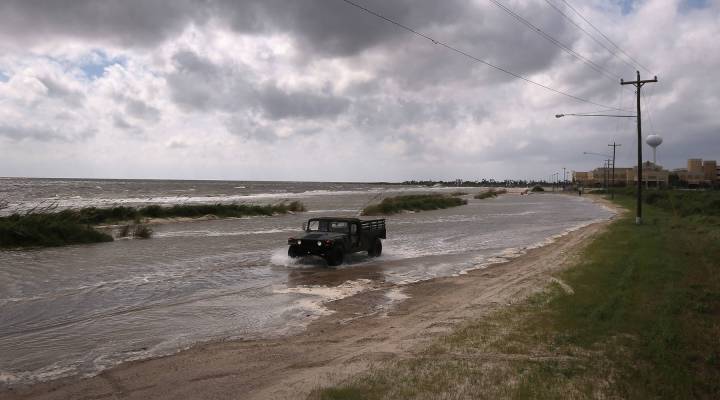 COPY
A U.S. National Guard patrol passes along a flooded beach ahead of the arrival of Hurricane Isaac on August 28, 2012 in Waveland, Miss. The parched Midwest will get rain after Hurricane Isaac moves inland, but it won't be enough to end drought conditions. John Moore/Getty Images

A U.S. National Guard patrol passes along a flooded beach ahead of the arrival of Hurricane Isaac on August 28, 2012 in Waveland, Miss. The parched Midwest will get rain after Hurricane Isaac moves inland, but it won't be enough to end drought conditions. John Moore/Getty Images
Listen Now

Jeremy Hobson: While the people of Louisiana fear the worst from Isaac others can’t wait till the storm arrives. I’m talking about the drought-stricken farmers in the midwest.

Adam Allington: The Mississippi River Valley has been among the hardest regions hit by drought this year.

Anthony Ohmes is an agronomist with the University of Missouri Agricultural Extension.  He says several inches of rain could salvage a borderline soybean crop.

Anthony Ohmes: We can recover some of that yield.  Now, if we don’t get the rain, those pods will just be short flat little beans and won’t really yield much at all.

Still, in areas where the water table is already depleted the rain is expected to ease, but not eliminate the ongoing drought.

Ganime: I’ve got hopes that if we get some of this rain out of the hurricane, I’ve got 30 acres of ground that I took hay crop off of that’s just sitting there. And yes, it’ll help.

The rain is also expected to add depth to the Mississippi River, which has seen frequent delays of barge traffic, caused by sandbars and low water.