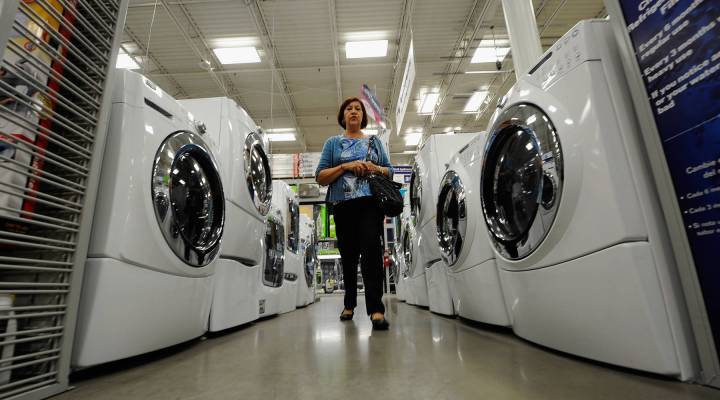 Durable goods orders are a sign of what’s to come

COPY
A customer shops for washers and dryers at Lowe's in Burbank, Calif. Kevork Djansezian/Getty Images

Durable goods orders are a sign of what’s to come

Stacey Vanek Smith:  A little later this morning we’ll get new data for durable goods orders. Those are orders of big ticket items like computers. It’s often looked at as a sign of how much businesses are spending. And it’s a good indicator of what we can expect in coming months.

Adam Allington: The durable goods orders to manufacturers are data that contains a lot of information about the overall direction of the economy.

Steve Fazzari is an economist at Washington University in St. Louis.

Steve Fazzari: So durable goods are anything that is designed to last more than three years. There’s things like cutlery, like spoons and forks and knives and there’s airplanes and ships. So it’s not entirely the consumer sector, nor is it entirely the business sector, it’s just stuff that’s designed to last.

Fazzari says durable goods are kind of like the canary in the economic coal mine, in the sense that it tracks quite closely with consumer confidence.

Fazzari: Do you want to look at the chart?
Allington: Yeah.
Fazzari: Would it help you to see what’s coming out here?

Sliding over to his computer Fazzari shows me the trajectory durable goods were on pointing nicely upward, then the recession cliff in 2008 and then…

Fazzari: Here you can see how really early in 2010, there was a big recovery in durable goods. Now we’re in 2012, we get these little wiggles from month to month.

Those wiggles, says Fazzari, could indicate an economy that is slowing back down, because durable goods tend to be among the first items consumers forgo in tough times.

Fazzari: You’re not going to be out buying these things unless you’re feeling a little more optimistic about the future. Or, if you have to put something off, you might put off durable goods.

But durable goods statistics are not sales of cars down at your local car lot, or the refrigerator you bought at Home Depot. Rather it’s the orders, shipments and inventories manufacturers carry from month to month — the first link in a supply chain to consumers.

Mike Mosblech: They kind of started to pull back because there were years when they over-produced; there expectations were a little bit off.

Mike Mosblech is the Manager at Maplewood Bicycle. Ever since the recession hit, Mosblech says it’s been harder for his suppliers to fill orders late in the year.

Mosblech: In the last say five years, a lot of the manufacturers don’t want to have a bunch of stuff in the warehouse just gathering dust.  No one wants to be caught holding the bag.

Mosblech says anyone who can’t afford a car right now, might consider a bike instead. But in order for the U.S. to put the recession permanently in the rear view mirror, Americans will need to buy a whole lot of bicycles — and also airplanes, mobile phones, medical supplies and lawnmowers.