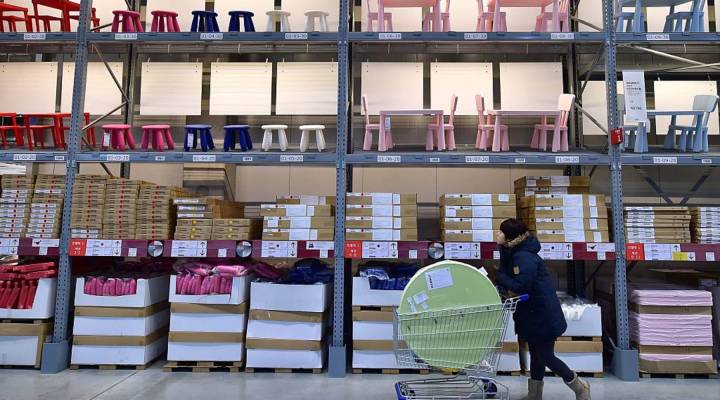 COPY
A shopper looks around at Ikea.   JUNG YEON-JE/AFP/Getty Images

“Basically items that are intended to last at least three years,” explained Sameer Samana, global quantitative strategist for the Wells Fargo Investment Institute. Economists care about durable goods orders because the number “reflects sentiment and confidence about the future,” she said.

You’re not gonna put down for a durable good like a new computer, much less a big piece of factory equipment if you don’t think you’re gonna use it and pay for it and maybe make money off it in the next few years. Which is why economists care about durable goods orders.

This past December’s numbers were a big disappointment.  They fell a seasonally adjusted 5.1 percent, and if you take out military spending, the decline is around four percent. Many economists were expecting a drop of about two-tenths of a percent.

Durable goods orders month to month are a notoriously volatile number, but taking the longer view, they fell 3.5 percent during 2015.

Which is not to say this is all about feelings. “The dollar has continued to strengthen,” said Sarah Johnson, senior research director for global economics at IHS Global Insight, “making our exports less competitive so U.S. producers are certainly being hard hit.” Johnson expects GDP numbers from the fourth quarter of 2015 to be low, and “we don’t see much of an acceleration in the economy” in 2016.

The oil and gas industries, hard hit by low oil prices, have likewise been ordering less. Higher borrowing costs for the industry, spurred by fears around the low price of oil, have also contributed, according to Global X Funds director of research Jay Jacobs. Low inflation hasn’t helped either. “If inflation is low, there’s not much of an incentive to hurry up and buy something,” he said.

But there is something that durable goods numbers do not capture.

“What it’s not capturing is the stronger parts of the economy, which is the U.S. consumer which is doing very well right now,” said Global X Funds’ Jay Jacobs. “Unemployment’s low, wages are increasing, there’s more disposable income because oil is cheap.”

And when it comes down to it, manufacturing is important to our economy, but it’s only about 12 percent and falling. “It’s a real mistake to read too much into that December number,” said Campbell Harvey, professor of finance at Duke. “We can’t use the same calculus that ‘oh well durable goods are down therefore we’re going into a recession’ – that might’ve been true in 1950 but it’s not true in 2016.”

What is true about 2016 is that our economy is extremely conflicted.  Part doing well, part dragging. Mix it together and you just get a lot of economic blah.