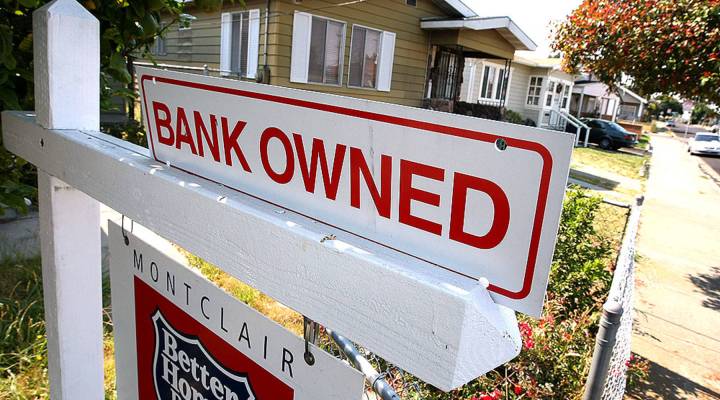 COPY
A sign is posted in front of a foreclosed home for sale in California. Justin Sullivan/Getty Images

A sign is posted in front of a foreclosed home for sale in California. Justin Sullivan/Getty Images
Listen Now

Tess Vigeland: It’s been more than a year since federal regulators reached a settlement with banks over foreclosures that should never have happened. This week, those same regulators issued new guidelines for deciding what kind of money home owners might get. If they were wrongly foreclosed upon, banks might have to fork over more than $125,000. Each.

Meanwhile, nearly three million people are wallowing in the muck that is the foreclosure process. And as Marketplace’s Stacey Vanek Smith tells us, that process comes with a price tag.

Stacey Vanek Smith: Martha Wright has owned her home in the beach town of Avalon, N.J. for more than 10 years.

Wright had good credit and a job as marketing executive. She took out a jumbo loan — north of $750,000 — and built a barn-style house on the bay. She filled it with antiques she’s been collecting and refurbishing for years.

Wright: This is my vision and I’ve been saving to build a house at the shore since I was 16 years old. I am 56.

Wright loves the house and living the bay, where she kayaks twice a day.

Wright: Hey Richard! Did you just catch a flounder?

Wright was making mortgage payments of over $6,000 a month. Then, four years ago, her salary got cut in half. She started dipping into her savings and applied for a mortgage modification. But she was turned down because she had too much money in the bank to qualify.

Wright: The second time I applied, I was turned down, because they didn’t think I really lived in the house. They thought it was a vacation property.

Wright has applied for a mortgage modification five times. She says she’s spent countless hours on the phone with different people at JPMorgan Chase, which services her loan. And then there’s the paperwork, which Wright says takes a lot of time to prepare and fax — and re-fax — to the bank.

Wright: And you become the library weirdo who’s always in there with her plastic file bucket. And then you’re handing the fax to the person at the library at a dollar a page who can certainly read the fax. So you’re now the town crazy woman who’s losing her house.

After draining one of her savings accounts, Wright stopped making mortgage payments two years ago. Now she sets aside $3,200 a month, hoping to one day use that money to pay a modified mortgage. She says being delinquent has come with a lot of stress.

Wright: If I had to go away on business, I was worried I’d come back and find the locks changed and my cat gone.

Sarah Manaugh: The interest accrues. Another cost is legal fees. The home owner also has to pay the legal fees that the bank incurs in the course of the foreclosure action. That’s written into almost every mortgage.

Wright shelled out $5,000 to hire a lawyer. Her credit score has plummeted and she’s been turned down for a credit card. She’s taken freelance work to get extra money and keeps household expenses to a minimum.

Wright: OK, I’m not living large here. You’ve seen the place. I’ve done everything in my power to cut costs.

Chase told Marketplace that large loans, like the one Wright has, are harder to modify. Wright says she will keeping doing everything she can to work out a deal with the bank.

Wright: Oh, I’m not walking away from this. Absolutely not.