Jeremy Hobson: Fenway Park in Boston turns 100 years old today. And As Curt Nickisch of WBUR in Boston reports, the park’s legacy isn’t all about baseball — it’s also had a big impact on the real estate around it.

Curt Nikisch: A black-and-white photograph from 1909 shows where Fenway Park would be built.

Leslie Donovan: And as you can see, it’s a swamp. There’s nothing there at all.

Historian Leslie Donovan says Fenway went up in 1912 on marshy land that was filled in. Construction brought in roads and electricity. The early auto industry popped up around it. What’s now the Red Sox ticket office used to be a car showroom. Then came the neighborhood.

John Pramataris: This is one place you do not touch! You keep as is. This is history. This is the park of all parks!

But Fenway almost didn’t make it. Team owners wanted a new stadium to sell more seats. But fans and neighbors rallied to renovate instead. After 100 years, the roots have grown deep. 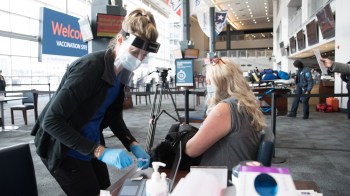