British budget to be unveiled with focus on income tax

British budget to be unveiled with focus on income tax

Stephen Beard: A former British finance minister once threatened to “squeeze the rich until the pips squeak.” That won’t be today’s message. The current finance chief’s expected to lighten the load for those earning more than a quarter of a million dollars a year. Their top rate of income tax will likely be reduced from 50 to 45 percent — and even further in the future.

Emma Boone of the Taxpayers Alliance welcomes the move.

Emma Boone: If you cut high levels of tax down to a more reasonable level then more people will pay it and your tax revenue will increase.

But to counter the charge that he’s only favoring the rich, the finance chief is expected to cut the income tax rate to zero for anyone earning less than $14,000 a year. 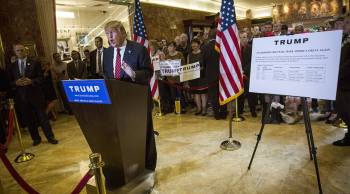