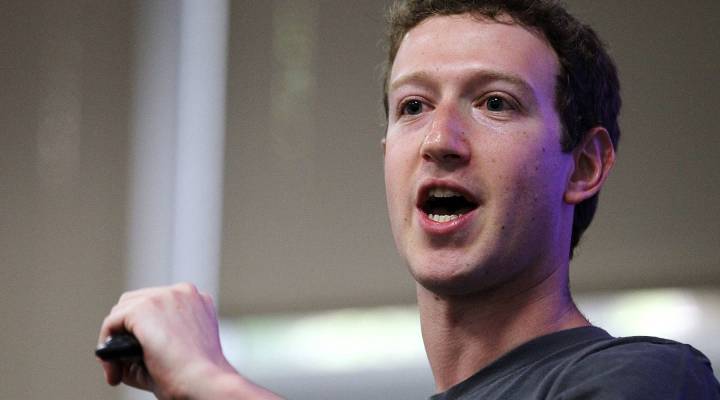 Facebook CEO Mark Zuckerberg speaks during a news conference at Facebook headquarters July 6, 2011 in Palo Alto, Calif. Facebook reported that Zuckerberg will take in only $1 for salary next year. Justin Sullivan/Getty Images

Facebook CEO Mark Zuckerberg speaks during a news conference at Facebook headquarters July 6, 2011 in Palo Alto, Calif. Facebook reported that Zuckerberg will take in only $1 for salary next year. Justin Sullivan/Getty Images

In the papers Facebook filed yesterday, the company revealed that Zuckerberg asked for — and was granted — a pay cut. From a base salary of about a half a million dollars this year, to just one measly dollar in 2013.

Of course, he still owns the biggest chunk of Facebook stock. Why is ‘the hoodied one’ joining the pantheon of dollar CEOs? Marketplace’s Stacey Vanek Smith takes a look.

Stacey Vanek Smith: Back in 1978, Lee Iacocca took the helm of a struggling Chrysler and said would only earn a dollar a year. A modern American tradition was born: Apple’s Steve Jobs, Google’s Larry Page, Whole Food’s John Mackey.

Sure, these guys had more money than they could probably ever spend, but why not get paid for your work? Caitlan Zaloom is a cultural anthropologist at NYU.

Caitlan Zaloom: The dollar salary is as a kind of pact with the workers. You’re throwing yourself in with the fates of your employees.

If a CEO only gets paid in stock, his fate and the company’s fate are fused.

That is not what’s going on at Facebook. Zaloom thinks Zuckerberg’s salary decision has a lot more to do with the uncomfortable nature of the product he sells — namely us and the information we hand over. He doesn’t want there to be a direct connection between that and his money.

Zaloom: By saying, I’m only going to take a dollar, that is actually saying: I’m not even going to acknowledge that your labor is adding to my wealth.

Or maybe the message is that wealth is beside the point, says James Fowler, a social media expert at the University of San Diego.

James Fowler: The message is: That Facebook is not about the money, it’s about other things.

Fowler points out the dollar-salary club is chock full of tech CEOs. The message: Silicon Valley isn’t Wall Street. Its goals are things like: think different, not be evil and share with friends. And if they happen to make billions of dollars in capital gains, well, so be it.