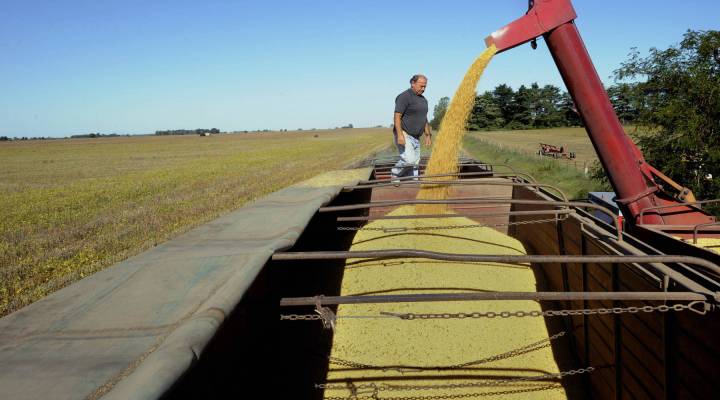 COPY
A worker controls as a hopper wagon unloads soybean into his truck in a field in the locality of Perez Millan, 200 km from Buenos Aires, on April 3, 2008. Argentina is the world's leading exporter of oil and oilseed meal and the third in soybeans. DANIEL GARCIA/AFP/Getty Images
BBC World Service

A worker controls as a hopper wagon unloads soybean into his truck in a field in the locality of Perez Millan, 200 km from Buenos Aires, on April 3, 2008. Argentina is the world's leading exporter of oil and oilseed meal and the third in soybeans. DANIEL GARCIA/AFP/Getty Images
Listen Now

Justin Rowlatt: This is a special co-production on the global impact of the European debt crisis.

Kai Ryssdal: There’s a saying in investing that I’m pretty sure you’ve heard: Past performance is no guarantee of future results.

Rowlatt: With that in mind, is there a lesson in history that might shed some light what’s happening in Europe today?

Ryssdal: A lot of people point to Argentina, which defaulted on its sovereign debt in 2002, devalued its currency — but, as the BBC’s Paul Henley reports, is recovering quite nicely.

Paul Henley: Actually, most economists agree that Argentina’s recovery since the crash has been nothing short of miraculous. New money is being flaunted in the gleaming waterside cafes that didn’t even exist eight years ago. There’s been a big boom in domestic production.

But when it comes down to it, Argentina owes its recovery overwhelmingly to one thing: The humble soya bean, being sown in countless thousands of spring fields here. It’s being exported on unprecedented levels — largely to China.

And the opportunity for profit here in the vast fertile flatlands of the Pampas — where there are two harvests a year — is big. So big, that cow-herding gauchos could soon be a thing of the past.

Jorge Piran’s family has been farming this land for more than a hundred years.

Jorge Piran: Price has increased a lot, farmers changed from cattle. I think it’s good for the country. It’s a pity that part of our culture is missing.

Argentina has had other advantages Greece could arguably do with. Devaluation was of course possible without the euro, making exports viable again overnight. And the country’s South American location, according to Martin Redrado, former governor of the Central Bank and now senior politician, has been crucial.

Martin Redrado: The dollars that Argentina needed to finance its growth, also to increase the level of local consumption, has been provided by basically the goods that we sell abroad. And also, I have to say that the neighborhood where Argentina is living is much stronger than what we had before. Brazil is much stronger, so for example you say, ‘Well, is it just commodities?’ No, we are selling cars to Brazil.

In this clothes factory in the aftermath of the economic crash, the workers, faced with redundancy, burst through police lines, seized control and declared the business their own co-operative.

Celia Martinez: Strange as to say that without the crisis, none of this would have happened, the evictions were terrible. But out of that came something very special.

Henley: Do you have a message for those crowds that you see on the television in Greece?

Martinez: It would be to tell the workers in Greece to trust in their own strengths.

Greeks, unfortunately, might need to do more than man the barricades to see the kind of recovery Argentinians have seen.