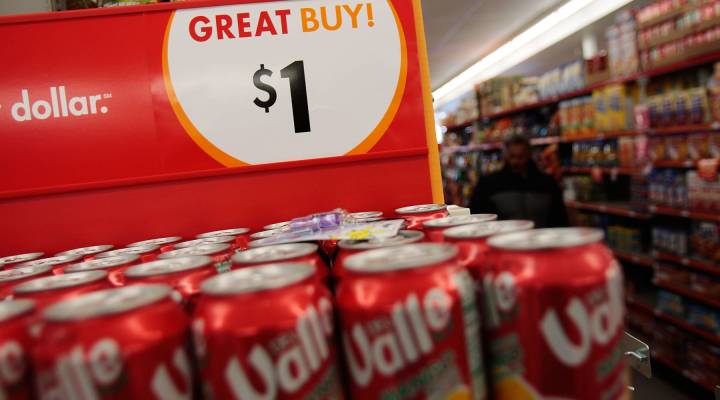 A discount store sells soda for one dollar a six-pack in Ontario, Calif. Chris Hondros/Getty Images

Discount and dollar stores have become so popular with shoppers that big-time investors — who would have turned up their noses a few years ago — are falling over themselves to get a piece of the low-end market.

Today we heard a pair of investors is buying the dollar store chain 99 Cents Only for about $1.6 billion. That’s 160 billion cents (only).

On the one hand, this is good news: investors are buying assets, which is what all the Federal Reserve’s wrangling with interest rates was designed to encourage. On the other hand, it’s a sign that Americans are badly strapped for cash. That balances out the ups and downs of the Marketplace Daily Pulse today, and keeps our heart rate neutral.

99 Cents Only said in a statement that affiliates of the investment firm Ares Management LLC and the Canada Pension Plan Investment Board have offered to buy the retailer’s stock for $22 per share in cash. That’s a 32 percent premium over the company’s closing price on March 10, the day before 99 Cents Only disclosed that it had received an acquisition offer. So that’ll make Ben Bernanke happy — Operation Twist does work!

So much for asset prices. But the 99 Cents Only announcement comes just a day after the release of some disturbing numbers about declining income in the average American household. Here’s what the New York Times had to say about it:

In a grim sign of the enduring nature of the economic slump, household income declined more in the two years after the recession ended than it did during the recession itself, new research has found.

No wonder dollar stores are looking hot right now (Dollar General, Dollar Tree and Big Lots were all up more than 1 percent in trading at press time). But just because your name makes you sound inexpensive doesn’t mean you really are. Case in point: The car-rental firm Dollar Thrifty has effectively been up for sale for more than 18 months, but it took itself off the market today. It seems its potential buyers just don’t think it’s cheap enough.