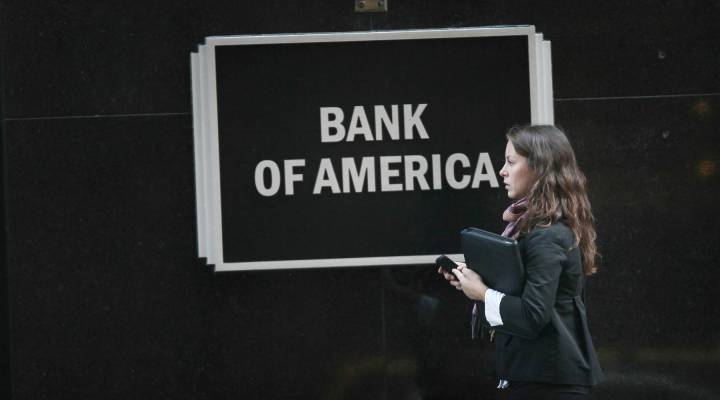 A woman walks past a Bank of America branch in the Financial District in Chicago, Ill. Scott Olson/Getty Images
Daily Pulse

A woman walks past a Bank of America branch in the Financial District in Chicago, Ill. Scott Olson/Getty Images

Five bucks a month. That’s what you’ll be paying for a Bank of America debit card starting next year. If you just use your card for ATM withdrawals, you escape the fee, but a single purchase with your plastic will earn you a five-dollar ding.

This fee is likely to put a crimp in consumer spending, just when we need more of it. The news that B of A’s nickel-and-diming could constrict the country’s blood supply is having an adverse effect on the Marketplace Daily Pulse today.

It’s no wonder that banks are looking for ways to make money on debit cards. The credit card business is highly competitive, and average rates on cards have been falling recently. Moreover, recent regulations have squeezed fee income generated from overdraft protection.

It was already hard enough to make money on debit cards, but next month, new rules go into effect that will cap interchange fees. Those are the charges that banks levy on merchants for using debit cards at cash registers and the like. The rules are part of the 2010 Dodd-Frank financial overhaul law. Right now, interchange fees average 44 cents per transaction. From Oct. 1, the reduced fee will be 21 cents plus an additional amount to cover losses from fraud.

If you feel that your bank is slowly bleeding you to death via a thousand little paper cuts, you’re not imagining it. Fees are climbing, as benefits are being whittled away. Only 45 percent of non-interest checking accounts are free, down from 65 percent in 2010 and the peak of 76 percent just two years ago, according to Bankrate.com’s 2011 Checking Study. Many banks are shifting checking customers into new accounts that have higher balance requirements or other conditions to get free checking. Some banks have already reduced or eliminated their debit rewards program. Some retailers, especially gas stations and convenience stores, are setting $5 or $10 minimums for a debit card purchase, to be sure they don’t start racking up costs on small-ticket debit purchases. The Wall Street Journal recently quoted Thomas McCrohan, an analyst with financial-services firm Janney Montgomery Scott, who said in a research note that credit-card companies plan to increase the fees to 23 cents per transaction from roughly eight cents right now.