Jeremy Hobson: The website AllthingsD.com reports this morning that Apple will unveil the much-anticipated iPhone 5 on October 4th. Now, Apple has not confirmed that report, but it’s already got a lot of iPhone fans excited.

One of them is TJ Roe, who has been holding onto a partially broken iPhone, scared to buy an iPhone 4 only to find that it’s outdated as soon as the iPhone 5 comes out. He joins us now from Grand Island, Neb. Good morning.

Roe: It’s got a nice kind of spiderweb pattern going from the upper righthand corner down to the middle left side of it.

Hobson: A big crack in the screen?

Hobson: And how long has it been like that?

Roe: Since Halloween of last year. It flipped out of my hand while dancing and kind of just smashed against the floor.

Hobson: But you haven’t felt it necessary to go out and get a new iPhone?

Roe: Well that was the thing, is that I knew there’d be another one coming out within a year, so I figured, why would I get this one when the next one’s going to be that much better, you know?

Hobson: Well, now we’ve got the news this morning that All Things Digital is reporting that the new iPhone 5 is going to be unveiled October 4th. Are you going to be standing in line to get a new one?

Roe: I don’t know about standing in line. And I don’t even know if I’ll go and be one of the first ones to get it, because usually when these things come out — like when the iPhone 4 came out, they had antenna issues. So I don’t know if I’ll be an early, early adopter. I might wait and see a week or so, but then definitely as soon as I know it’s an all-clear, yeah, I’m totally down for that.

Hobson: TJ Roe, who is using an iPhone 3G with a big crack on it. Thanks so much for joining us, and don’t cut your finger. 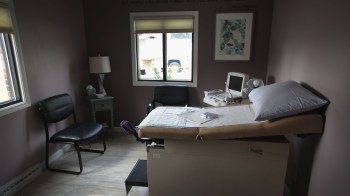