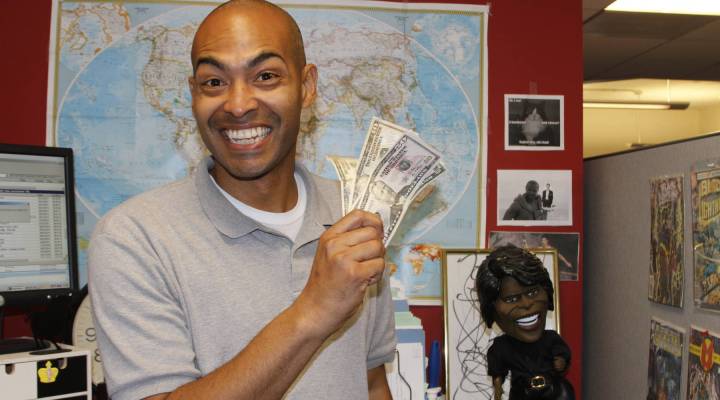 Quit while you’re ahead

Quit while you’re ahead

After all the scorn I poured on the idea of playing the lottery a few weeks ago, I was given a rude shock today. Marketplace Money producer Stephen Hoffman won the lottery!

Stephen was in a bodega across the street, buying a carton of milk for his cereal, and he thought he’d try a scratch card. Lucky Number Seven.

As he was scratching the $2 card clean, the clerk told him a story about another customer who’d won very recently. And lo and behold, the ticket came up good! $75!

The clerk gave him a bunch of notes, including a lot of singles. Play again, he said. So Stephen did! He was reaching for the same Lucky Number Seven card, when the clerk stopped him.

Lightning never strikes twice, he said (or something like that). So Stephen picked another card. And won again! $10.

You can imagine the pressure. He was on a streak! Surely he should play again! Fortunately Stephen is a disciplined sort of chap. Plus he works for Marketplace Money, so he knows it makes sense to get out of the game while you’ve still got money on the table. Like the smartest kind of investor, Stephen quit while he was ahead.

He’ll always have that nagging feeling, of course. What if the next card was the jackpot? But the secret to a long and happy life is to be content with the risks you take, the decisions you make … and the razzle in your pocket.