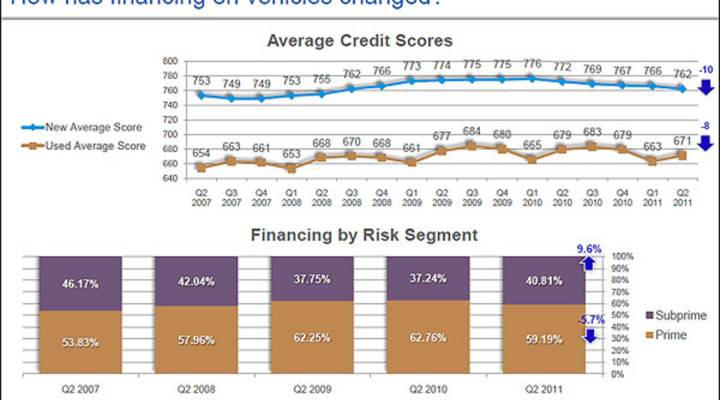 Lenders are getting more comfortable with risk. That’s the conclusion of a study by Experian, which found subprime borrowers are finding it easier to get their hands on a loan to buy a car. That’s not a good sign in our view, and sent the Marketplace Daily Index down 2 points today.

The study found more car loans are being issued, compared with last year, and a bigger share of those loans are going to people with credit “outside of prime”. Twenty-two percent bigger, in fact.

Banks are issuing more loans overall: their share of the market has increased by more than 28 percent, but the banks aren’t holding all those loans. Of all the car loans outstanding right now, they’re holding 3 percent less than they did last year. As for the new loans they’re originating, the banks are getting rid of a large part of them, selling ’em off (sound familiar?) to folks who securitize them and sell the bonds on to investors. We don’t like the sound of that too much, but we do like the fact that delinquencies are down, according to the Experian report, and repos are also lower.

This from the report:
“…new vehicle loans for customers with credit “outside of prime” increased by 22.4 percent, when compared to the previous year. In Q2 2011, 22.29 percent of all new vehicle loans went to customers in the non-prime, subprime and deep subprime categories, increasing from 18.21 percent in Q2 2010.”

Uh oh…
“The largest percentage increase in new car loans was in the category with the highest risk, deep subprime, which jumped 44.1 percent, moving from 1.48 percent of all new vehicle loans in Q2 2010 to 2.13 percent in Q2 2011.

“Even with a tepid economic recovery in the first half of the year, automotive lenders were willing to increase their level of risk,” said Melinda Zabritski, director of automotive credit for Experian Automotive. “This was good news for automotive manufacturers, as nearly half of all consumers fall into non-prime, subprime and deep subprime risk categories. Providing loans to these risk tiers opens the market to significantly more prospects.”

But more debt being taken on by people who might not be able to afford it, manage it or pay it back?