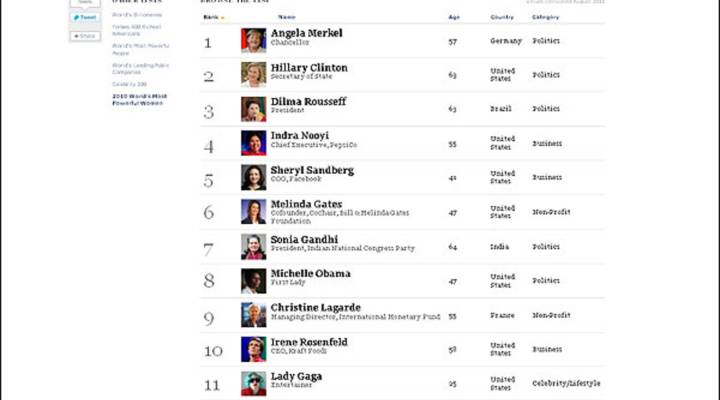 Forbes magazine has dropped 20 Americans from its list of the world’s 100 most powerful women. This sorry state of affairs sets The Marketplace Index back one point.

Jill Abramson, the new executive editor of the New York Times, debuted at No. 12.
The new host of NBC’s Today Show Ann Curry debuts at No. 66.
Rep. Michele Bachmann (R-Minn.) makes her first appearance on the list at No. 22. Susan Wojcicki, Google’s senior vice president for advertising, is the new No. 16.
Twitter’s vice president for international strategy, Katie Jacobs Stanton, is No. 56. Oracle’s President, Safra Catz, comes in at No. 40.
Margaret Hamburg, the commissioner of the Food and Drug Administration, is No. 21.
Helene Gayle, the CEO of the humanitarian relief group CARE, enters at No. 36.
Harvard University President Drew Gilpin Faust comes in at No. 83.

Not to worry: 62 percent of the 100 women on the list are from the United States. And of those, 34 are either running or managing global businesses and brands.